The Cat® hydraulic mining shovel is part of a long history. Mining shovels have been working, in some form, on mine sites for more than 60 years. The machines have been sold by multiple manufacturers, including O&K, Terex, Bucyrus, and finally, Caterpillar upon our acquisition of Bucyrus in 2011. Over these 60 years, the machines have increased in sophistication and capability.

Now a Cat product for almost a decade, the 6060 is the most popular 600-ton hydraulic mining shovel in the industry. As part of the Caterpillar New Product Introduction process, which began several years ago, we decided to completely overhaul the 6060 and fully incorporate Cat DNA in the machine’s systems, processes and designs. More importantly, we wanted to make upgrades that would bring the most value to today’s mining customers.

We started by listening to our customers. Internal field support teams in both Dortmund, Germany, and Tucson, Arizona, spoke informally with customers about their experiences on visits to job sites. Then, we launched a formal voice-of-customer effort, organizing a forum moderated by a third party where we gathered feedback to determine what updates would create the most customer value. Informal and formal feedback aligned on the opportunities for improvement in four areas: reliability, durability, integration and improved total cost of ownership of the machine.

Our engineers began working on changes in each of these areas, many of which were complementary. For example, increasing integration — ensuring all parts, components and service literature are incorporated within Caterpillar systems — contributed to improved machine uptime, which is a measure of reliability. Virtual design and validation significantly contributed to our progress. By visualizing potential interferences or other problems virtually before casting machines in iron, we saved time and costs while producing a higher-quality machine. As a part of this process improvement, engineers conducted a rigorous hydraulic hose audit with excellent results. To date, pilot machines have worked more than 10,000 hours without a single major hydraulic leak.

As we made improvements, we wanted to offer them to customers as quickly as we could. While it took five years for Caterpillar to design and implement all the desired updates we established at the beginning of the program, we took a unique batched approach that allowed us to bring changes into production as soon as they were validated. We released the first batch of updates within a year, with two more batches released over the years that followed. Another important priority was ensuring backward compatibility wherever possible, enabling customers who already had 6060 machines in the field to access the latest improvements, as well.

Given the importance of operator efficiency, the next generation 6060 cab was specifically designed with the operator in mind. Caterpillar’s cab engineering group and product planners collaborated with two research and development consultants to conduct an extensive worldwide research plan to gather insights from operators. Our state-of-the-art next generation cab design is a direct reflection of the operator feedback received from this effort. Most notable is the redesigned, spacious operating environment that provides enhanced visibility and unobstructed views of the digging environment from all seats — important for an operator who is orchestrating his/her movements with large mining trucks that are consistently moving.

The importance of a trainer was also a key finding of the study, which led directly to our innovative, three-seat design and inclusion of two emergency stops. This includes a full-size, elevated trainer’s seat. Superior noise and temperature control, seating comfort and adjustability, camera system, glare control, hand holds and cupholders all contribute to the best-in-class operator environment, which minimizes operator fatigue and maximizes the productivity of our next generation 6060.

The fully overhauled, next generation 6060 is more durable and nearly 30 tons heavier than legacy machines, which translates into longer service life and better performance. In addition to improved structures, the new design incorporates several other key features, including:

As the best-selling hydraulic mining shovel in its class, the 6060 is the mining shovel that operators have depended on for more than a decade. Thanks to collaboration between Caterpillar and our customers who know mining best, the next generation 6060 is ready for the next era of mining and will work harder and last longer. 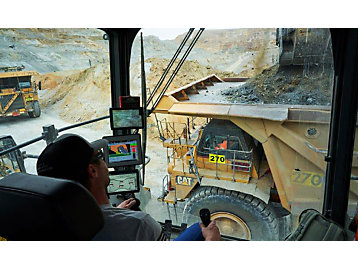 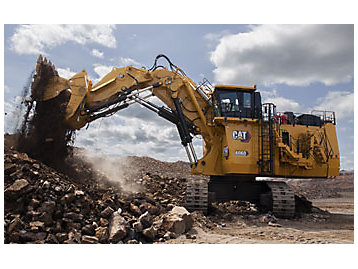 An Undercarriage That Can Take the Heat

One aspect of the 6060 overhaul was the undercarriage on which the machine rides. Prior to the redesign, our hydraulic mining shovel could only move a short distance before needing to be manually cooled or rested to dissipate heat that built up on the undercarriage. This caused significant challenges for customers whenever they needed to move their machines. Thanks to the contributions of Caterpillar engineers from across the organization, we introduced a new heavy-duty undercarriage that can move the mammoth machine efficiently.

Our engineers joined dealer Ziegler Cat in Minnesota for the maiden voyage of a next generation 6060 field follow machine. The team moved the machine a record 12 miles from the build pad to the mining pit, and an inspection at the end of the day found no wear on track pads, roller and idler rims or sprocket teeth. This successful upgrade is one of many ways the new 6060 keeps customers moving.