Why I’m Proud to Be an Engineer

February 19-25 is Engineers Week, and Introduce a Girl to Engineering Day falls on February 23. In honor of our engineers—and the future innovators who will walk Caterpillar’s halls someday—we’re featuring Valerie Wiest, Caterpillar’s Virtual Product Development Manager.

Tell us about your role today as a virtual product development manager.

Let’s start with what virtual product development, or simulation, actually means. Virtual product development involves taking the laws of physics and math and using enormous computing power to simulate how Cat® machines will operate in the real world without having to first build those machines in iron. This means we can innovate faster and better than ever before, and we can do it at a lower cost. In my specific role, I lead a global team of 250 virtual product development experts in the U.S., China, and India. My team is responsible for most of the highest-end work we do on physics- and math-based models. Those models are then used by product engineers to make decisions about our future products.

Why did you want to become an engineer?

I honestly can’t remember a time in my life when I didn’t want to be—or didn’t believe I could be—an engineer. My father was engineer, so in my household growing up, math, science, and exploration were a given. As a kid, I was always taking things apart to figure out how they worked. (Several of the clocks in our house met an untimely demise from some of these early “explorations.”) If something in our house broke, I tried to figure out why and how it broke, and I was always looking for ways to do things faster and more efficiently. In school, math and science came easily, and I enjoyed those classes so much. In hindsight, all of those interests showed passion for uncovering the answers to questions about the physical world around us—which is what an engineer does, at the most basic level.

In the 1980s, roughly 6 percent of engineers were females, and today that number has increased to 14 percent. Was that a concern for you while you were studying to become an engineer?

Before I got to college, it never occurred to me that there wouldn’t be many women in my classes. Gender-assigned roles didn’t exist in my household growing up, and my parents were always supportive, so I never considered engineering a “man’s job.” I found out years later that my father, who was an engineering professor at the time, was very concerned about it for me, but I clearly survived. [laughs] People today would probably be shocked by the lack of gender diversity in my engineering classes back then. I had regular classes—in large lecture halls at the University of Illinois—with only four other women. In the main building where I attended class, there was only one women’s restroom, several flights up, while men’s restrooms were around every corner. For one of my classes in another building, I actually left the building to get to a women’s restroom. But I wasn’t discouraged by the gender disparity. I was at school to become an engineer, and that’s what I did. But luckily, that disparity is starting to change, so female engineering students today won’t have to face some of the challenges I did.

Today, 18-20 percent of engineering students are female. What do you think has changed, and what more needs to be changed?

One major thing that’s changed is that school systems are no longer contributing to the idea that math and science are a male pursuit, and parents are starting to realize this as well. When girls in the U.S. today express an interest in Science, Technology, Engineering, and Math (STEM), they’re largely encouraged to explore those spaces, not discouraged like they used to be. I’m definitely not saying there aren’t still some very serious hurdles for girls in the form of gender inequality in society—because there are—but I feel like things are starting to shift in the right direction.

And to keep moving in that direction, some things do need to change. I don’t think we spend enough time really explaining what a day in the life of an engineer is like and the kinds of things we do. Organizations like FIRST that let kids and teens work on real-world problems and learn from real-world engineers inspire young people of all genders, but all kids don’t have the opportunity to take part in these STEM activities. That’s why the big engineering companies need to be out there more, driving a positive perception of STEM and inspiring the next generation of engineers. Last year, Caterpillar invited students to the Global R&D Headquarters, the Peoria Proving Ground, and other engineering-focused facilities for tours and to hear speakers, and employees were encouraged to participate in National Take Our Daughters and Sons to Work Day, among other things. I know other companies hold events like this as well. But we all need to do much more in this space if we’re going to inspire young women to become engineers.

How did you end up working at Caterpillar?

In college, I majored in Theoretical and Applied Mechanics (TAM), which wasn’t (and still isn’t) a common major. Potential employers didn’t really know what that meant or what to do with us. [laughs] So, when I was wrapping up my doctorate, I asked our alumni newsletter to publish photos and bios of soon-to-be graduates to see if that might help us. Larry Cobb, who was a leader in simulation efforts at Caterpillar at the time, saw my photo and bio and called me. Larry had also been a TAM graduate, so he “got” it. I came to Caterpillar to meet Larry and take a tour and was amazed at the cool stuff they were working on. That’s when I knew I wanted to be at Caterpillar. Luckily, Larry offered me a job.

What experiences or people have influenced your career?

There are way too many to count. My mother was one of my early influencers. She was open to whatever career I wanted, and she said something that will stick with me forever: “You don’t have to be the best; you just have to do your best.” That’s what I try to do every day. I’m grateful for so many leaders and peers who have inspired me along the way. They taught me how to communicate well, how to relate to both people and technology, how to think about the big picture while focusing on what I can do to facilitate it, and how to be both relentless and positive while working toward constant progress. So, really, it was a collection of people that helped me develop as a person and a leader, and helped me shape my career.

What advice do you have for girls who are interested in exploring a career in engineering some day?

Pursue all aspects of math and science with a passion. Find the areas in those subjects that come naturally to you or that fascinate you, and then compare that with possible roles in engineering. You’ll want to work in an area you’re naturally inspired by, so don’t pick an engineering focus just because it offers the highest salaries or best job prospects. Get in, dig in, and find the engineering focus area that sets you on fire! 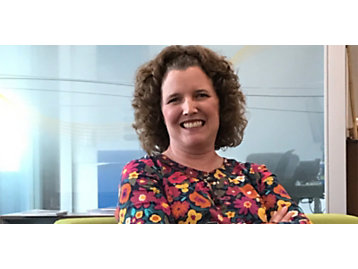