The Importance of Infrastructure: Building Airports Around the World

A nation’s transportation system is the backbone of its economy. Economic growth is directly tied to transportation efficiency and reliability. Check out how Caterpillar equipment is helping to build new airports around the world.

At the crossroads of East and West, Istanbul is the natural site for a global air transport hub. That’s a good thing because by 2023, Turkish Airlines plans to transport more than 120 million passengers per year -- nearly double its current numbers. That ambitious goal presents a major challenge: building the world’s largest airport from the ground up in just 42 months. It’s a massive undertaking.

To handle the huge scale, difficult site conditions and tight deadline, the Istanbul Grand Airport assembled a fleet of more than 400 machines, all from Caterpillar. They will rely heavily on Cat® EMSolutions™ technologies to streamline equipment management for the project’s massive fleet. The remote monitoring technology is like an eye watching from the sky 24 hours a day, 7 days a week, tracking all the machines and providing data about every machine. This advanced technology is essential because managing a project of this scale using classic methods would be virtually impossible.

Click here to watch a video about Caterpillar’s involvement in the project.

Mexico City acts as an entry point for many tourists and business travelers, strategically connecting Mexico to the rest of the world. It is also one of the 20 largest cities in the world with a population of 22 million. With only two runways, the current airport can no longer handle the increased demands.

Construction on a new airport in Mexico City is now underway using Caterpillar equipment. It will be one of the world's biggest airport infrastructure projects and is expected to be the largest airport in Latin America and the second largest in the world. The new airport will have capacity to handle 120 million passengers annually by 2062. This project will showcase Cat Connect, onboard machine technology and fuel efficiency.

The first stage of the project, schedule to be completed by 2020, contemplates the construction of three parallel runways and one spectacular six million square feet terminal building. It will also require the movement of 63 million cubic meters of different materials including volcanic rock and basalts. The site for the new airport is prone to flooding since it is located on top of the former Texcoco Lake, presenting unique engineering challenges.

To handle the scale and complexity of this iconic project, local Cat dealer Madisa has established a dedicated branch inside the construction site to provide full support to all contractors. Currently there are over 100 Cat units working on site including a fleet of D6K2s averaging 450 hours per month, requiring advanced equipment and condition monitoring to minimize downtime and maximize fuel savings.

Grupo Carso, one of the largest construction companies in Latin America, has been awarded with the construction of one of the runways and the main terminal building. Being one of the top Cat Connect users in the region, they are the technology leader in the Mexican construction industry. Currently Grupo Carso is in the process of integrating Cat Grade control to their construction process to reduce costs and meet their tight deadlines.

The Istanbul Grand Airport assembled a fleet of more than 400 machines, all from Caterpillar. 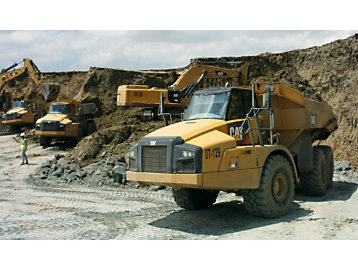 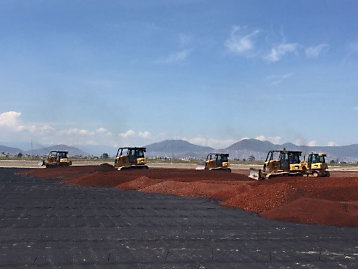