The unique design of the National Corvette Museum (NCM) in Bowling Green, Kentucky, caught the eyes of those traveling Interstate 65 this spring. What didn’t stand out was the land across the interstate—an empty field with a few rolling hills typical of Kentucky's countryside.

Or so it appeared.

That 184-acre field was actually one of the world’s most technologically advanced jobsites, and it's now home to the NCM Motorsports Park, which includes a 5.15 km (3.2 mile) road course.

The course requires precise tolerances, and technology helped that happen every inch of the way—from the first pass of a scraper during site preparation to the last roll of a finish compactor. During rough grading, dozers equipped with Cat AccuGrade™ 3D GNSS-based grade control technology worked within tolerances of tenths of a foot. Then, machines equipped with AccuGrade 3D Total Station-based technology were used to complete the more accurate grading down to hundredths of a foot. To finish the work, AccuGrade 3D paving systems were used in order to achieve tolerances down to thousandths of a foot.

The NCM Motorsports Park will serve many purposes. It's a test track for Corvettes with the Corvette museum and a General Motors factory less than a mile away. It also will be used for various types of driver training, and clubs can rent the track as well.

A race track project requires smoothness, and the NCM park was no exception with specifications prohibiting deviations of more than three mm (1/8 in.) around the track. Another specification required evenness of the longitudinal joint in the center of the course surface.

“There couldn't be a cold longitudinal joint,” said Chris Higgins, engineering manager at Scotty's Contracting & Stone, the firm that created the engineering model and handled the site prep and paving. That meant that the crew needed to use two pavers side by side, and the joint was compacted while still hot. “It’s really like there isn’t a joint,” Higgins said.

Also required on the job were material transfer vehicles (MTVs)—in this case, Weiler E2850s. Weiler MTVs, which are sold and serviced by Cat dealers, deliver hot mix while allowing the pavers to work continuously at a consistent speed. These are crucial benefits on a job with such demanding smoothness specs. Four Cat® CB64 Vibratory Asphalt Compactors then handled each phase of compaction.

The importance of technology

“On this job, we talk about 3D and GPS, it probably saved us a quarter of a million dollars just on engineering,” Scotty said. “When we save money, that enables us to be cheaper and to win bids, and it really helps our company prosper.”

Monty Boyd, president and CEO of Whayne Supply, the local Cat dealer, said customers such as Scotty help his company prosper, too.

“Scotty is one of those customers who is always on the leading edge,” he said. “We’re there trying to help him solve problems and find the solutions he’s looking for to stay ahead of his competition.”

Is the job a success? Only the customer can answer that question, and the answer from Mitch Wright, general manager of NCM Motorsports Park, is an unqualified “yes.”

“I believe we’re going to be the envy of the industry with the surface we have,” Wright said. 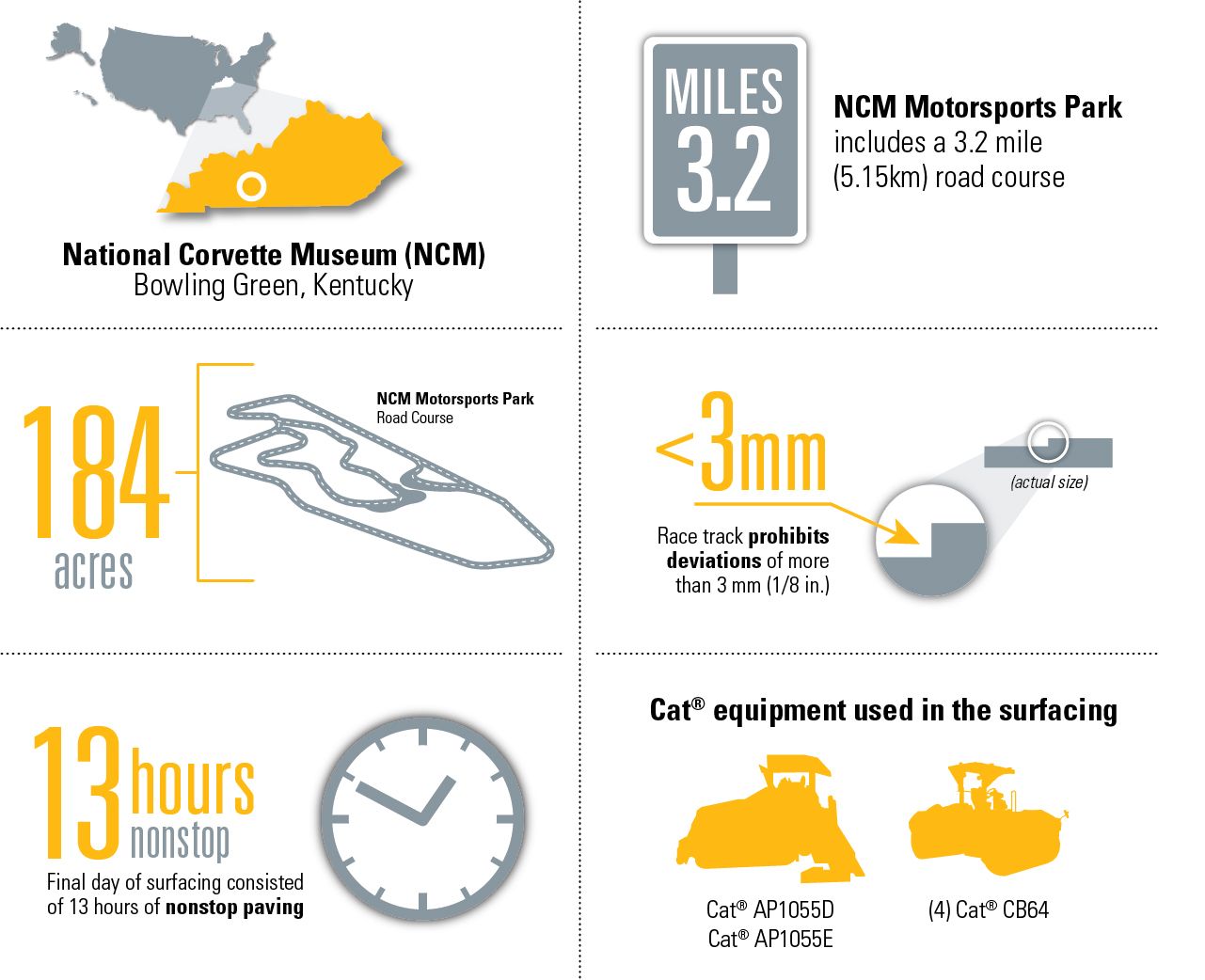 Over the years, Caterpillar people have followed in our founders' footsteps, introducing breakthrough solutions in turbo charging technology, electronic controls, fuel systems, drive systems and more for the purpose of enhancing our customers' success.

Caterpillar provided track-type tractors and diesel electric sets for Operation Deep Freeze, which were specially built to survive constant temperatures of 65 degrees below zero for use 24 hours a day.