With help from a donated Caterpillar excavator effectively transformed into a robot, a Swiss-based organization took on a life-or-death humanitarian challenge.

The Digger Foundation is a non-profit group specializing in the development and use of robotics technology and equipment dedicated to safely removing millions of unexploded land mines and other devices such as hand grenades and improvised explosive devices (IEDs) from war-torn regions around the world. Since 1998, this group has led or supported demining projects in many countries, such as Bosnia, Senegal, Mozambique and Angola. The Foundation’s entry was one of just 10 international finalists in Dubai, selected from 1,017 entries from 165 countries.

The journey started last year, when the keys of a Cat® 319 Excavator were handed over to the Foundation by Yves-Alain Tschirren, a finance representative from the Americas & Europe Distribution Division. The collaboration with the Digger Foundation happened after Caterpillar Vice President Nigel Lewis gave the Geneva team a social responsibility challenge: find projects which illustrate the company’s brand and values.

The 319 Excavator became the centerpiece of the Digger Foundation’s DOME system. DOME stands for Digger Operating and Management Environment. The system focuses on mine and explosive clearance in cities and urban areas. It is one of the first tools of its kind to address the challenge of operating in urban areas, where IEDs and other types of explosives are trapped in rubble. Deminers currently have to work by hand at great risk.

The prototype machine will clear cities that have been reduced to rubble and contaminated with unexploded mines. Mine detection dogs are used to first locate an unexploded device, then the excavator is tele-operated from a safe distance with the help of cameras, controllers and virtual reality goggles with no human lives put at risk. Learn more about the DOME system in this video.

A full demonstration of the DOME system took place in Dubai at the Robotics Award For Good Finals. Cat dealer Al Bahar provided the facility in Dubai for technicians to work on the machine in preparation for the competition. The million dollar prize was offered by the UAE government to support innovation in the key area of artificial intelligence and robotics. Ultimately, the Digger Foundation’s Dome System entry placed sixth overall. The Dubai competition is just the beginning. Going forward, it is expected the retrofitted excavator will be used in Iraq as part of the humanitarian efforts to help its cities recover from years of armed conflict.

For more information on the Digger Foundation: https://foundation.digger.ch/foundation/

of
of
of
of 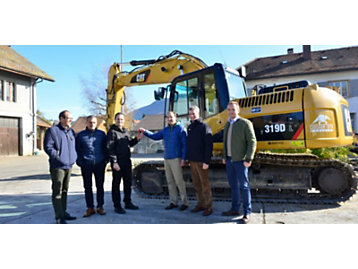 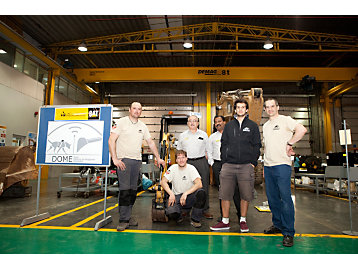 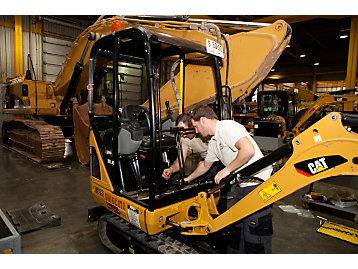 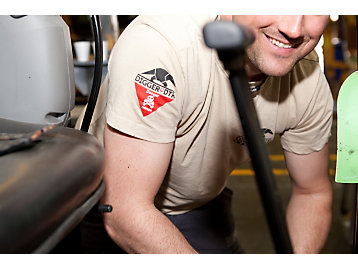