Our History in Russia and Eurasia

Caterpillar has a long history in Russia dating back more than 100 years. Even before Benjamin Holt and C.L. Best joined forces to form the company, tractors were being exhibited in Russian trade and industrial shows – as early as 1913. We’ve had a presence in the region ever since.

In 1973, the first Caterpillar office was opened in Russia (formerly known as the Soviet Union), selling tractors and pipelayers. The following years were a struggle to move beyond a supplier to become a participant in the region’s economic and social development.

Buoyed by changing political winds, the 1990s opened the door for increased business success. During this time, we opened three sales and product support offices to serve the growing business and returned the area’s administration to Moscow after 10 years of managing Russia and CIS from Geneva.

Retired Caterpillar Group President Stu Levenick was named general manager of Caterpillar CIS in 1997. Stu recently reflected on the challenges of the time, “Despite uncertainties, we had some really great advantages that we combined into an aggressive growth strategy based on our belief that fundamental strengths of the commonwealth would become a strong opportunity for Caterpillar.”

That initial strategy resulted in establishing a Caterpillar dealer organization and our first wholly owned manufacturing operation in Tosno. By 2001, dealers were appointed to multiple countries. “That foundation proved to be a launching pad for the growth and expansion that would occur over the next 20 years,” Stu said.

Today, Caterpillar is committed to Russia and the entire Eurasia region. Combined Caterpillar and Cat® dealer employment total more than 5,000 jobs in about 180 locations. With two manufacturing operations and five marketing offices, our company footprint is more significant than ever.

Check out this short video made to commemorate 45 years in Eurasia. The video chronicles our journey and features a few of the pioneering leaders who laid the foundation for success that continues today.

Machines on Display in Russia 1971 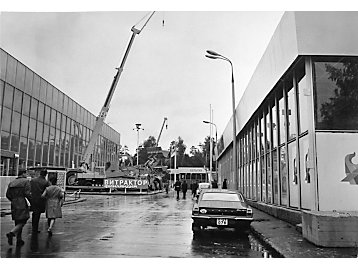 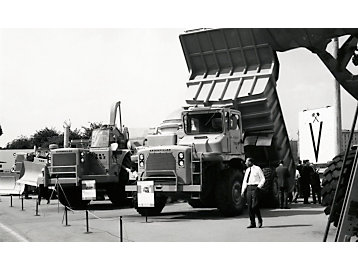