Caterpillar and the Big Game

There were only 100 days until the big game.

It wasn’t just any big game, it was literally called the Big Game – the annual football showdown between Stanford and California.

Stanford had the home game during the 1921 season, and they planned on playing the game at their stadium.

There was only one problem: The stadium they wanted to play in wasn’t built yet.

The grounds on the Stanford campus where they wanted the football team to have a place to call home was a blank canvas, and it needed to be turned into a place fit for the oldest rivalry in the west.

So they commissioned the man who would become Caterpillar’s first chairman to get the job done.

Four years before Holt and Best came together to form modern day Caterpillar, C.L. Best was running the company that bore his name – the C.L. Best Tractor Co. Three of his Best 60 tractors pulled elevating graders, carving more than 230,000 cubic yards of dirt out of the earth to build a bowl stadium that would seat 60,000 people.

Not only was the stadium done in time for the Big Game (Stanford lost to Cal 42-7), the project was complete ahead of schedule. Stanford Stadium has since hosted events like soccer’s World Cup and has served as a venue for the Olympics, but it didn’t get any bigger (even bigger than the Big Game) than Super Bowl XIX in 1985 – which also happened to be the last time the Bay Area hosted a Super Bowl until this year.

At the time, Stanford Stadium was a bit of an odd choice to host the NFL’s premier event, even though this was prior to the explosion of luxury suites, pools, wine bars and Wi-Fi that now populate modern-day venues. The 64- year-old stadium’s decorum included wooden bleachers that would be covered by seat cushions provided by an up-and-coming Silicon Valley company called Apple.

The advantage Stanford Stadium had was its expanded 84,000 seating capacity and the warmer temperatures of Palo Alto when compared to the San Francisco 49ers’ sometimes blustery Candlestick Park venue that sat near the bay.

So the NFL poured more $2.3 million into upgrading the stadium with temporary scoreboards, lighting and additional restrooms. It’d be hard to imagine Cat® equipment not being involved in the transformation.

For those scoring at home, the San Francisco 49ers handily defeated Miami Dolphins 38-16 in a game that matched Hall of Fame quarterbacks Joe Montana of the 49ers against Dolphins signal caller Dan Marino.

Thirty-one years later, Silicon Valley is home to another Super Bowl. Stanford Stadium is now the practice home of the Denver Broncos for the week, and the game against the Carolina Panthers will be played in Santa Clara’s brand-new Levi’s Stadium.

Of course, the Super Bowl isn’t just a game anymore – it’s a full-fledged event leading up to kickoff. A pair of Cat telehandlers pictured below helped build Super Bowl City, an interactive experience with two stages where more than 1 million fans will gather. 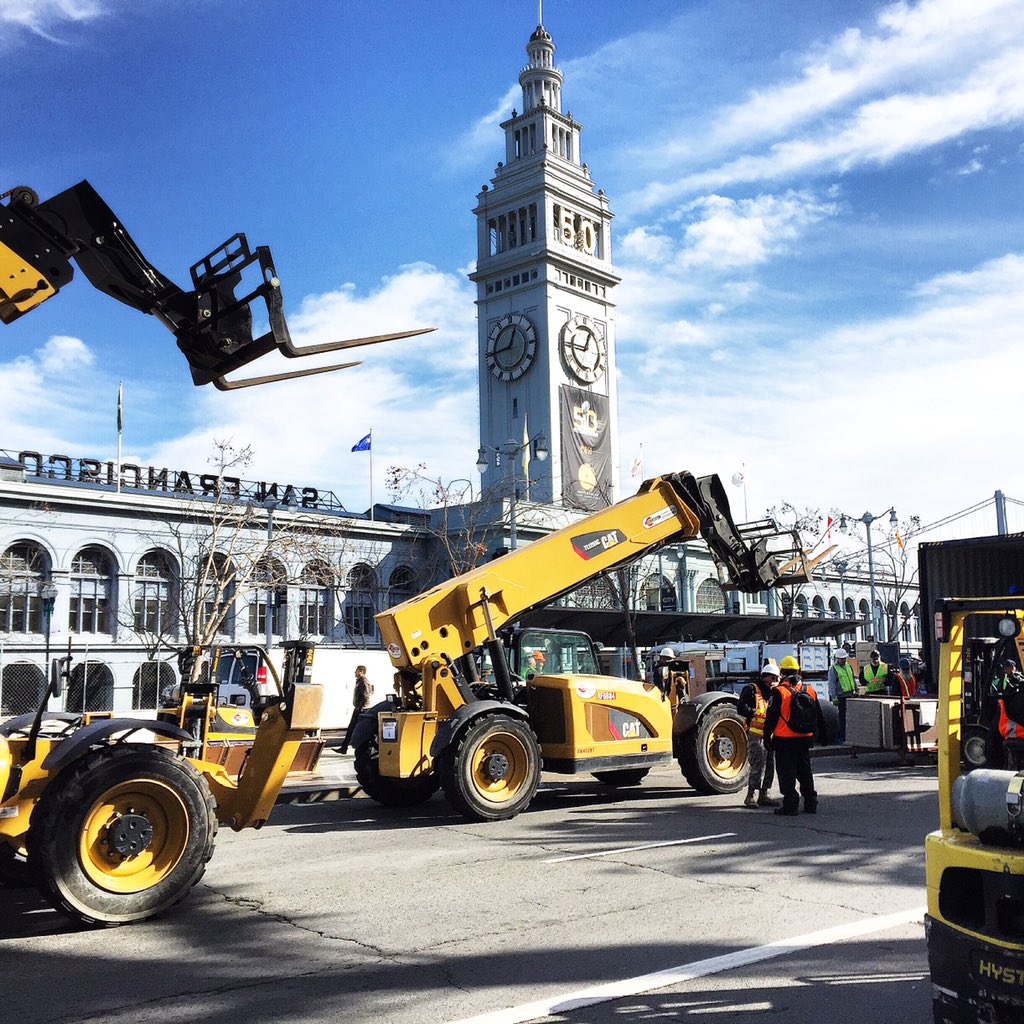 One thing’s for sure – the big game has gotten even bigger since the salad days of Stanford Stadium.

At 91 years old, Soldier Field is the NFL’s oldest stadium. Caterpillar was actually first to take a pass down the field … literally.

The history of Caterpillar is all about doing: creating, building, problem solving, innovating, testing, servicing and improving. Beginning with Benjamin Holt and C. L. Best, the people of Caterpillar have always been – and continue to be – extraordinary.