The Fuel Systems facility in Pontiac, Ill., celebrated its 35-year anniversary in operation this year. The facility observed the milestone with a week-long celebration in September that gave employees a chance to look back on the facility's rich heritage and participate in several special events, including a ceremony to unveil a 35-year anniversary banner and a barbeque.

In January 1978, Caterpillar acquired what was known as the "old Motorola building," a 137,000-square-foot, one-story building on 103 acres, in Pontiac. In March 1978, the Pontiac facility became operational and was assembling iron by April. This was the result of increasing demand for engines and engine components, technological changes in the engine field, the urgent need for a building with room for expansion and a location within driving distance of Mossville where most of Caterpillar's technical employees were located.

At the banner presentation, Susan Toher, operations manager at Caterpillar Pontiac, told the audience, "The world has seen a tremendous amount of change in the past 35 years. Through it all, Pontiac has been a key supplier to Caterpillar engines and Cat machines, and our products are literally all over the globe, being depended on now, 24 hours a day, seven days a week, just as they have been for 35 years."

Mary Hamilton, receivables coordinator at Caterpillar Pontiac, was one of the first six employees hired when Pontiac opened in 1978.

"The building has certainly changed and many people have come and gone. The product has changed over the years, but here we are 35 years after we opened the doors. We are still providing critical quality product to the Caterpillar enterprise. Our business is built on relationships between our dealers, suppliers and customers. I'm always humbled and thankful to have been a part of this Caterpillar team for the last 35 years," Hamilton said.

"When I was hired in, we put fuel pumps together one at a time in the cafeteria area." 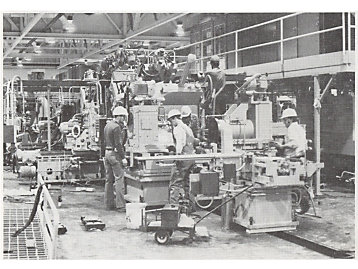