Caterpillar has a longstanding reputation for product quality - our machines withstand the test of time. This is a result of robust validation, much of which takes place at proving ground facilities around the world. The Peoria Proving Ground (PPG) has been proving Caterpillar quality for 65 years, since June 1948.

Before PPG, temporary proving grounds were located on various empty lots around the East Peoria campus as early as 1910. The first known proving ground was located alongside the San Leandro, California plant during the late 1920s. A more formal Peoria area facility was established on a 160-acre tract known as "Springfield Hill" in East Peoria in the 1930s.

With the expansion of the product line in the 1940s, Caterpillar sought out a larger space with more varied terrain to allow for validation of new machines and attachments. In spring 1947, negotiations began for the purchase of an 850-acre site in Washington, Illinois. The Peoria Proving Ground facility was constructed on this site and testing began on June 10, 1948.

While PPG has experienced many changes, upgrades and additions throughout the years, its focus has remained the same. The facility and its people continue to ensure our products meet customer requirements for reliability, durability and performance. Today, Caterpillar also operates proving ground facilities in Tucson, Arizona, Clayton, North Carolina, Tongzhou, China and Ono, Japan.

Arrival of the first test machines at the new Peoria Proving Ground in Washington, Illinois on June 10, 1948. 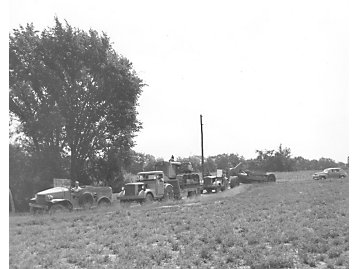