"I hope through our meeting, we can deepen cooperation between Caterpillar and Shanghai, which will ultimately contribute to Shanghai's sustainable development and promote the remanufacturing industry in China," said Vice Mayor Zhou.

Folley and the team also visited the newly established China (Shanghai) Pilot Free Trade Zone where they met with Executive Director, Dai Haibo to explore the opportunities that exist for us with this new zone. The free trade zone, which first launched in Shanghai, China in September, is the first free trade zone launched by the Chinese government and is viewed as a testing ground for a number of economic reforms. Key areas of focus include the import and export process, international trade, leasing, factoring, free currency exchange and tax rate, to name a few.

Greg and the team also visited the China Ministry of National Development and Reform Commission (NRDC) where they met with NDRC Deputy Director Ma Rong, to gain further perspective on the current economic situation in China and brainstorm ways to better position the remanufacturing industry as as a national strategic partner in further developing the Chinese economy in a sustainable way. NDRC was very receptive to collaborating with Caterpillar and said they would be willing to sign a Memorandum of Understanding (MOU) with us to develop a China Remanufacturing Industry strategy, which is a tremendous win for Caterpillar.

This visit was critical in our pursuit to grow the remanufacturing business in China. Based on the understanding and agreement we have already received from national level ministries, the Shanghai government and Shanghai level ministry departments, we are making great progress and will continue on this journey together. 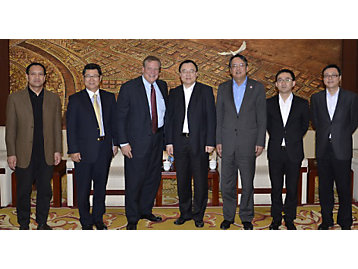