On February 14, more than 75 leaders and employees from the Reman, Components and Work Tools Division (RCWT) and the Large Power Systems Division came together in Corinth, Miss., to celebrate the expansion of its current operations to include the remanufacture of C175 engines. RCWT Vice President Greg Folley was in attendance to congratulate the team, as well as Large Power Systems Division Vice President Tana Utley, Governor Phil Bryant of Mississippi, and a host of other local officials and community partners.

“Corinth is really the hub for our Reman products and services,” said Mark Stratton, Reman General Manager, during an employee meeting before the C175 event.

Later that afternoon, Folley echoed Stratton’s comments while standing in front of the crowd and the newly remanufactured C175 on display in the large engine facility for its unveiling: “If we consider the progress of the Corinth facility alone, it’s amazing to see how much we’ve grown our remanufacturing business—a core part of our sustainability strategy at Caterpillar. There’s no doubt in my mind that with the Best Team, we can continue to focus on more growth to better serve our customers.”

Caterpillar began remanufacturing in Mississippi more than three decades ago with a few employees in one building. Now, with a workforce of more than 1,200, the Mississippi remanufacturing team has grown in size and scope. “The Mississippi Reman facilities have been operating successfully for nearly 32 years with exceptional results from a talented workforce that truly embodies Best Team and is a key enabler to these results,” said Roberto Ortega, Mississippi Reman Facility Operations Manager. “The hard work, strong values, laser focus on safety, teamwork and commitment to excel in everything we do is what continues to make a positive difference each and every day.” With that growth and commitment to teamwork, Stratton says the Reman team has made it a priority to communicate across the RCWT Division for quality improvements.

“Within the past year, there has been more collaboration on our engine program than ever before, due to the great work of the Corinth, Mossville and Lafayette teams,” said Deb Duzinskas, Reman Mining Product Manager. “With programs like the one we’re announcing today, we can clearly see the benefits of that teamwork.”

Production of the C175 will ramp up throughout the year and represents a company investment of $14.8 million, with an expectation to create approximately 30 positions to be filled by both internal and external candidates. 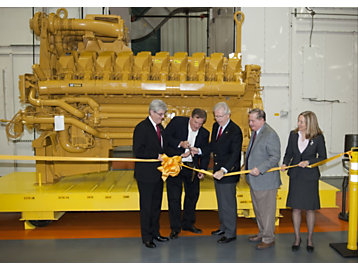