After devastating tornadoes struck parts of Oklahoma City and the surrounding areas, Caterpillar, Cat® dealers and the Caterpillar Foundation-supported organizations sprang into action. The city of Moore, Okla., was devastated by an EF5 tornado May 20, leaving homes, schools and hospitals in rubble.

Cat dealer Warren Cat, located in Oklahoma and Texas, reported no employees were injured from the tornado, however several employees suffered damage to their homes.

Warren Cat mobilized a team and began relocating equipment and needed resources immediately. A number of other Cat dealers also jumped into action, including Foley and Holt, who sent power modules at the request of Warren Cat to help reopen the Water Treatment Facility near Moore. Warren also shipped light towers, excavators, generator sets and compact construction equipment units to the area.

Warren Cat pushed through a 10 skid steer loader order through for the clean-up efforts within a day of receiving the request and is working on an order of six 930K small wheel loaders. The clean-up efforts are just beginning, and 44 Cat loaders are being used to clear roads.

"We are well organized and well supported by Caterpillar and the dealer network," said Jim Nelson, dealer principal at Warren Cat. "We are grateful for the level of support and encouragement we have received from the Caterpillar family. We are thankful for the leadership and dedication of our employees in dealing with this tragedy."

"I have been very impressed with the sense of urgency that Caterpillar and our dealership network have demonstrated through this disaster," said Eric Hermann, Caterpillar district manager of Americas Distribution Services in Houston. "Our support and commitment to this area won't be letting up anytime soon. We're still needed as the city and surrounding areas transition fully into clean-up mode."

Tad Agoglia and his team from First Response Team of America (FRTA), supported by the Caterpillar Foundation and using Cat machinery, headed to Moore the day the EF5 tornado hit. Agoglia and his team were escorted to a collapsed school to help in the rescue efforts. The team has been working alongside firefighters and other first responders at the scene, helping families dig through the rubble. Agoglia predicts they could be working in Moore for one to two months.

Warren Cat is also supporting FRTA by providing a requested backhoe loader and housing for Agoglia and his team for the duration of their stay. Skid steer loaders and gloves are also being provided by Warren to volunteers in the Little Axe and Carney, Okla., area, another community affected by the storm.

The American Red Cross was also able to respond quickly thanks in part to the U.S. Annual Disaster Giving Program (ADGP). The Caterpillar Foundation invests in the ADGP to help the Red Cross open shelters, provide meals and reconnect displaced residents. This program provides a funding base that allows the Red Cross to respond immediately to the needs of individuals and families impacted by disasters. The ADGP investment takes the place of Foundation donations to individual disasters in the U.S.

Cat® equipment helps clean up after the destruction of tornadoes that ripped through parts of Oklahoma City. 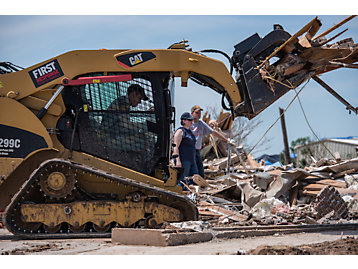