Jim made the surprise announcement during Doug’s retirement celebration on March 30 at the Edwards Demonstration and Learning Center. Other speakers at the celebration included Steve Thompson, CEO of Easterseals Central Illinois, former Caterpillar Chairman Don Fites and Doug’s wife, Diane. You can view the renaming announcement video clip in this article.

Doug has “left a lasting legacy here at Caterpillar,” Jim told the hundreds of attendees at the celebration. He “demonstrated strong leadership in good times and in very tough times.” Jim gave two examples of Doug’s many contributions as Chairman and CEO – adding sustainability as a core value and reviving our dedication to customers, reminding us that “their success is our success.”

Doug was also “the leader who made the CVC a reality.”

Caterpillar broke ground for the Caterpillar Visitors Center in September 2010 and it opened in October 2012. At the 2012 opening ceremony Doug said the CVC “is a celebration of so many things: our city, our products, and the world our products have helped build over the years.” It’s where we showcase our products, our history and the work of our employees to customers, dealers and guests.

Since the CVC opened, more than 300,000 people from 50 different countries have visited.

Renaming the CVC wasn’t the only surprise for Doug at the retirement celebration. Knowing that he loves his Cat machines (Doug already owns three), the Oberhelman family added to his fleet with the gift of a D6 dozer. 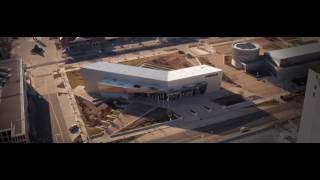