“With this facility, we invest in the long-term, as China is the largest construction and mining equipment market in the world,” said Gwenne Henricks, chief technology officer and vice president of the Product Development & Global Technology Division (PD&GT).

CRDC signed the Investment Agreement with the Wuxi local government in August 2008 and opened the Phase I facility in December 2009. With successful startup and overwhelming demand from the product groups for less regulated country (LRC) product development, Phase II was completed in May 2011 and Phase III in June 2012.

“R&D plays a key role in Caterpillar’s Win in China strategy,” said Brian Sun, CRDC director. "The completion of Phase IV will further enable CRDC to innovate and customize products to support our growing customer base in China and other growth markets.”

Although the facility has been open for less than four years, CRDC is a leader in innovation in China with significant number of awarded patents. In March 2013, CRDC received the designation of “Technology Advanced Service Enterprise” from the Ministry of Science and Technology, Ministry of Commerce, Ministry of Finance, State Administration of Taxation and National Development and Reform Commission.

Another key highlight of CRDC is its perfect safety record. Since construction began on CRDC in 2008, there have been zero recordable injuries for employees, agencies, contractors and visitors.

Today, CRDC Wuxi has 750 engineers and supporting staff. It is home to a variety of engine test cells and a machine integration center, as well as labs for fuel systems, turbo chargers, hydraulic systems, virtual reality, cooling and aftertreatment, among other capabilities. 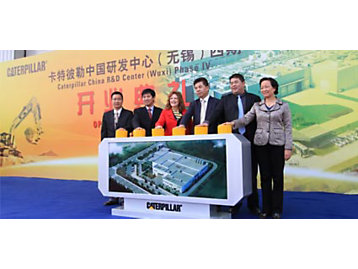