The tourist destination region along the Piracicaba River was used on August 18 for a street race including more than 2,000 participants in five and 10 kilometers stretches. The river is the main attraction of Piracicaba, a Brazilian city that is home to one of the largest Caterpillar plants in the world.

The event, sponsored in part by Caterpillar, featured the debut of the team formed by Caterpillar employees and coordinated by the company's medical division. The group was initially created by participants of the Preventive Health Center that Caterpillar Brasil offers to employees, families and retirees. The center and its medical professionals provide care to patients in several areas and equipment is available for physical activities focused on preventing health problems. More than 40 runners decked out in Caterpillar yellow and several other employees and friends attended the race event and represented Caterpillar well.

According to Health, Environment and Security Manager Wagner Codinhoto, the initiative is an excellent manner of engaging our employees and community in the practice of physical activities and healthy habits.

"We know that the benefits of practicing sports have a significant impact on the quality of life and add value to personal and professional lives," said Codinhoto.

He also noted that before the employees registered for the event, everyone in the group was evaluated by company doctors.

Ana Andrade, Governmental and Institutional Affairs manager, said Caterpillar offered the necessary structure and supplies for the team at the event.

"It was a very positive exposure, as we were able to see in the impact on the press and social media," Andrade said. "With the visibility we gained in this very first event, we will probably gain in coming events even greater participation from employees." 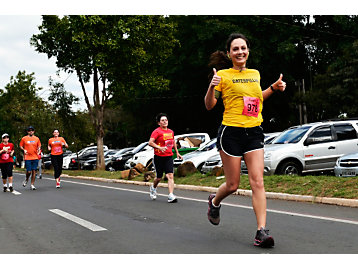