When Caterpillar announced in February 2012 its plans to open a new Building Construction Products Division (BCP) facility in Athens, Ga., both the company and the community were eager to work together. One month later on March 16, 2012, Georgia state and local officials joined Caterpillar leaders to ceremoniously break ground and begin construction. That day also marked the beginning of a strong relationship between the facility and Athens-Clarke and Oconee counties.

Since the summer of 2012, Athens employees have invested in the local community, participating in recruitment events, donating time and resources to local charitable organizations and speaking to students, businesses and government officials about Caterpillar. The facility has two employee committees, Cat Cares and the Teambuilding/Communication Team, dedicated to seeking out and organizing service opportunities. They are tasked with planning at least three events per quarter: a volunteer event located offsite and open to all employees and their families; a community support event located at the facility (i.e. blood drive, food drive); and a social event which promotes teambuilding and offers employees the opportunity to meet informally.

The BCP leadership team kicked off the volunteer initiatives in August 2012 with a Community Garden service project at a low-income housing complex in Athens. Working alongside Cat dealer Yancey Brothers, Vice President Mary Bell, the entire BCP leadership team and several Caterpillar employees cleaned up the grounds and improved the general landscaping of the complex.

Later that month, Athens facility leaders and members of the Women’s Initiatives Network (WIN) Athens Chapter attended a scholarship luncheon at the University of Georgia for the Jeanette Rankin Foundation (JRF). The Jeannette Rankin Women's Scholarship Fund raises funds and awards scholarships annually to low-income women 35 years of age and older who are in an undergraduate or vocational training program. JRF continues the legacy of Jeannette Rankin, the first woman elected to Congress and a proponent of peace and women's rights. Caterpillar donated $1,000 to the foundation for scholarship opportunities, demonstrating Caterpillar’s support of education and diversity and inclusion.

The Athens team continued to give to their community as volunteers at the AthHalf half marathon race in October to support community arts and education programs. Seventy percent of Athens facility employees participated in the event, donning Cat gear and working as finish line and course monitors to cheer on runners to the end.

2013 has also been filled with volunteer work and community involvement. On January 21, employees planted trees, cleaned up the playground landscape and created walking trails for a local elementary school as part of Athens’ Martin Luther King Jr. Day of Service. Partnering with the Rotary Club of Athens and again with dealer Yancey Bros., the team’s efforts now offer these students the opportunity to enjoy and learn about nature at school.

The BCP Athens team has participated in over 60 community events thus far. “The community made a significant investment in Caterpillar and we want the community to know they made the right investment,” said Mike White, Athens facility HR manager. “Internally, the volunteer opportunities give the Athens team the opportunity to build meaningful relationships and promote our core value of Teamwork.”

The community recently recognized the Caterpillar facility for its investment and engagement in the Athens-Clarke and Oconee counties with a “Picnic at the Farm” hosted by local business and community leaders in April. All Athens facility employees and their families were invited to attend the celebration at Dixon Oconee Springs Farm and enjoyed food and refreshments, tours of the farm and good company of the 500 guests. The event concluded with a very special gift: the picnic event sponsors presented Todd Henry, Athens operations manager, with an $8,000 check made out to the local United Way chapter on behalf of Caterpillar.

“We are very honored and thankful for such a generous gesture,” commented Henry about the donation. “The community showed its appreciation to Caterpillar by ‘paying it forward’ and the Athens facility team is proud to call this area home.”

Caterpillar is committed to engaging and improving regions where we work and live. The Caterpillar Foundation also has plans to support the Athens team’s efforts with the local United Way chapter later this year. The BCP Athens facility has a proven track record of understanding the importance of investing in local communities and has exciting plans to continue this record of service throughout 2013 and beyond. 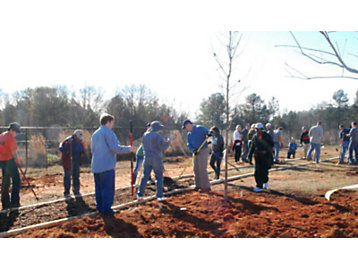