The 2,342-mile water route from the Atlantic Ocean to Duluth, Minn., has been operational for nearly 150 years. Cat equipment played a major role in excavating more than 51 million cubic yards of earth materials along the water route – from glacial till, which was often denser than concrete, to extremely mucky marine clay. It took about five years, from 1954 to 1959, to complete construction work on the Seaway.

In its first 10 years, the Seaway carried more than 350 million tons of cargo. Its 27-foot depth allows ocean-going ships to deposit their cargo at such fresh water ports as Toronto, Detroit and Chicago. The giants of the sea carry ore, grain and other products from Canadian and U.S. cities on the Great Lakes to countries all over the world.

The Seaway has helped Illinois become a leading state for total exports of both agricultural and manufactured products. 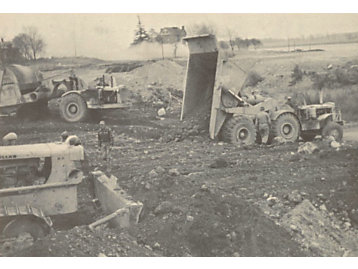