Among the cars of visitors and school buses that are parked in front of the Caterpillar Visitors Center, there was also an antique D4 Track-type Tractor parked at the center on Thursday, May 30. Mike McWilliams, collector of antique Caterpillar machinery and member of the Antique Caterpillar Machinery Owner's Club (ACMOC), drove from Bakersfield, California with his wife, Christine, fellow machine collectors Ed and Linda Stewart and his antique D4.

The McWilliams and Stewarts had participated in a "Play Day" in Wichita, Kansas over Memorial Day weekend where, alongside seven other antique Caterpillar machine collectors, they constructed a pond with antique Caterpillar machinery. The machines moved 25,000 yards of dirt over a four day period. McWilliams customized his D4, which was produced in 1949, with a six-weight blade.

Upon completion of the pond in Kansas, the McWilliams and Stewarts drove to Peoria, Illinois (with the D4) for the main item on their itinerary - going to the Caterpillar Visitors Center. "This center is awesome," said Mike McWilliams.

While touring, McWilliams spoke highly of his dealer, Quinn Cat® which is based in California. "I am able to get parts for my antique machines in as little as two days - now that's great customer service," said McWilliams. "This is why antique machines are still around and able to keep working - because we can still get service for them."

The McWilliams and Stewarts also had the opportunity to tour the East Peoria plant later that afternoon, which was the first time they had ever toured a Caterpillar facility. 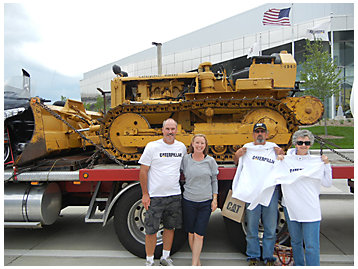