The Importance of Infrastructure: Investing in the United States’ Economy

A nation’s transportation system is the backbone of its economy. Economic growth is directly tied to transportation efficiency and reliability. In the United States, we are relying on investments made decades ago to sustain our growing and changing economy. As a result, the transportation network is aging and underfunded. We must renew our commitment to this system if we are to ensure our global competitiveness.

Whether the export opportunities are in our hemisphere or on the other side of the world, the goods we seek to sell must travel through a multi-modal transportation system that includes roads, rail, water and air. The condition and integration of these various modes will have a significant and direct impact on our ability to move these products quickly and efficiently at the lowest possible cost. As the world marketplace expands, our ability to move our goods around the world as quickly and efficiently as possible takes on added importance.

In the United States, the main source of federal revenue for our nation’s infrastructure is the motor fuel excise tax which is deposited into the Highway Trust Fund (HTF). The HTF’s revenue base is a user fee system – primarily motor fuel taxes. These taxes have not been increased since 1993, given political opposition from both parties in Congress. As a result, the HTF needs an additional $16 billion of revenues, approximately, per year through 2023 just to maintain existing federal highway and transit investment levels, including projected inflation. Otherwise, investment levels would have to be cut significantly, resulting in job losses and further deterioration of the nation’s highways and transit systems. 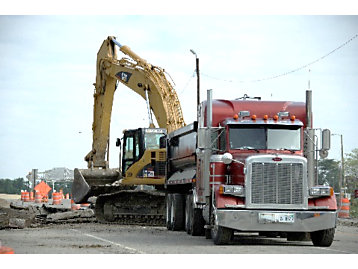 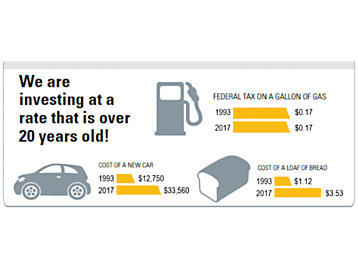 The Task Force and the BOLD Act

Caterpillar Group President Rob Charter and Martin Marietta CEO Ward Nye were asked by the American Road and Transportation Builders Association (ARTBA) to co-chair a Task Force to develop innovative solutions to increase our nation’s commitment and investment in its infrastructure. The Task Force is made up of a diverse cross-section of the ARTBA membership, which included many of our customers. After numerous meetings, the Task Force produced a comprehensive proposal –The BOLD Act – that was eventually adopted by the ARTBA Board of Directors. The ATRBA staff has been making the rounds in Washington, D.C., to explain the proposal and have been met with positive reviews.

The BOLD Act would eliminate taxes on heavy truck/tractor and tires sales, while initiating a Highway Transportation Services Tax, which is modeled on the way air cargo is currently taxed. This would raise new and significant funding for our nation’s infrastructure and provide direct federal investment in the National Highway Freight Network. Additionally, the proposal calls for a federal excise tax on the sale of rechargeable lithium-ion batteries used in the manufacturing of electric vehicles. The proposal would ensure that the HTF is structurally sound, funding is user-based, and would result in a more than 30 percent increase in federal highway and public transportation investment.

“We can’t build and maintain the infrastructure of the future using funding models that are decades old. ARTBA has pulled together a diverse team of industry leaders who all have the same goal – to ensure that the U.S. infrastructure can meet the needs of a 21st century economy. The proposal is well thought out, fair, and – most importantly – sustainable,” said Rob Charter. “I’m proud of the work the Tast Force has done, and we’ll work together along with other like-minded groups, like the Associate of Equipment Manufacturers, to ensure the team’s ideas are part of the ongoing debate.”

Importantly, much of the additional revenue raised by the proposal would be dedicated to a national freight network to ensure that goods and freight can move more efficiently and effectively throughout the country. This will allow Caterpillar to better and more efficiently serve our customers, and reduce travel times and costs. Ultimately though, Congress will need to review and take action on the recommendations of the BOLD Act.

There is a long way to go over the debate on improving our nation’s infrastructure at the federal level. There are many different proposals that will undergo review, and no doubt revision. But Caterpillar is committed to improving our nation’s transportation system and will be working in the coming months to ensure that we have an infrastructure that can meet the needs of a 21st century economy.

Nothing short of our global competitiveness is at stake.