The following are remarks from Chairman and CEO Doug Oberhelman's keynote address at the Detroit Economic Club.

Good afternoon and hello everyone. Beth, thank you for inviting me today. The Detroit Economic Club is such a well-respected forum; it’s quite an honor to be with you. And, Mark -- thanks for that kind introduction.

This year marks Caterpillar’s 90th anniversary as a company, and I want to start by showing a video we made for our employees. You’ll hear an iconic voice – Walter Cronkite, who spoke to a 1955 worldwide dealer meeting.

As you can tell, we’re pretty proud of our history helping to build, develop and power the world.

We have facilities in 24 U.S. states, including Michigan. Last year we expanded our Anchor Coupling operations in Menominee and we were glad to welcome Governor Snyder for that announcement. We also have a strong presence here through our Cat dealer, Michigan Cat.

Michigan Cat has almost 700 employees and eight locations in the state. We also have some valued customers and good friends here -- the Levy team and the Adamo team. I’m glad they could join us; it’s always great to be among customers and friends.

I’m going to offer some general thoughts about our topic – managing global volatility – and then I’ll be glad to answer some questions. I’ll focus, first, on the global aspect of Caterpillar, because we’ve been global since our very first day in business.

Today, we have facilities in more than 20 countries. We sell to more than 180 countries and have equipment operating on every continent. Well over half of our annual sales are outside the United States, and that’s been the case for many years.

As Mark mentioned, I’ve lived on three continents for Caterpillar. I’ve also traveled in over 60 countries, which is pretty typical for most of our leadership team.

Caterpillar’s roots in global business go back at least to 1929, the same year we were listed on the New York Stock Exchange. Our 1929 annual report noted several large tractor and combine orders for “the Soviet Russia.” Last year, we celebrated 60 years in Brazil. This year is our 50th anniversary in Belgium and our 40th anniversary in China.

Our greatest competitive advantages are our people and the 177 Cat dealers that sell our products to every corner of the globe. Michigan Cat has been with us since 1944 and some of our oldest dealers are international. We’ve had dealers for more than 80 years in Tunisia, Lebanon and South Africa.

So, Caterpillar has been at the crossroads of global trade, finance and politics – and the volatility that comes with that – since our very beginning. We take a long view of history and we have a track record of managing, I’d say pretty successfully, through difficult and uncertain times.

I thought we could illustrate current volatility through a snapshot of headlines and events from this past December. December seemed fitting because there were some noteworthy events, but there’s rarely a time when outside events don’t affect our decisions, planning and operations.

We don’t know what unexpected world event will come at us, or what our competitors will do. But like the CEO’s who came before me, my job is to fortify Caterpillar’s four walls to keep us as strong as possible – offering the best products and services so our customers make more money with our products than with anyone else’s. We have an acute focus on our customers, employees and stockholders.

Ninety years ago, we started by making tractors. When a photographer watched our unique iron track propelling a tractor across a muddy California field, he said it looked like a caterpillar – and that’s how we got our name. We were the first to put a diesel engine in a tractor, and we’ve been innovating ever since.

Today, we operate primarily through three product areas: Construction Industries, Resource Industries, and Energy and Transportation. We also provide financing for our products through Cat Financial, a captive finance company with over $35 billion in assets.

We sell over 300 products under 21 brand names; and, with a field population of 3 million machines and engines, you’d be hard pressed to visit any country in the world and not see a Cat machine at work. We’re all proud of that!

You’ll recognize Construction Industries as the Cat yellow iron that builds roads, dams and bridges. I’m one of the few people who actually like highway construction zones. I drive very slowly and count the Cat machines at work!

I joined Caterpillar as a finance analyst in June of 1975. That means there’s another anniversary in 2015 – mine. This is my 40th year as a Cat employee.

Think about the world in 1975. Billions of people weren’t part of the global economy. China had barely opened and Eastern Europe was locked behind an iron curtain.

It was hard to imagine then, what the world economy would look like today. Today, there are 7 billion people on Earth – and, with few notable exceptions – we all have access to the world market. What an opportunity!

I’ve managed through six U.S. recessions in my 40 years at Caterpillar. I started work two months after the fall of Saigon and at the tail end of the 1973-1975 “oil crisis” recession. I was right out of college, worried both about making my car payments and the high price of gas.

No other commodity is more essential to the global economy and more volatile than oil. The energy guru Dan Yergin spoke to our leadership team last month. He observed that oil, much more than other commodities, is directly affected by geopolitical crisis; and he also observed that almost as soon as we worry about over-supply, we start to worry about scarcity.

In my 40 years at Cat, global and economic volatility related to oil has been the rule, not the exception. Not only that, now we’re seeing the global source of oil move from the unstable Middle East to the more stable North America. So, the Middle East risk premium I’ve known throughout my career is changing to a risk discount.

While lower oil prices are good for consumers and long-term economic growth, the swift and dramatic drop has created a challenge for some of our customers and our forecasts. We have lowered our 2015 sales and revenue outlook primarily for that reason.

Caterpillar – like any company – is subject to economic cycles, which are often triggered by world events. In general, our structure has served us well in that when one area cycles down, as Resource Industries has these last few years, another cycles up, which was the case with Energy and Transportation. Right now, until mining recovers and / or the price of oil rebounds, we’re facing headwinds.

We’ll manage through the current oil price slump as we have done in the past. We’ll control costs. We’ll be as competitive as possible to win every sale, and we’ll keep innovating and developing new products.

Also last December, China’s leaders forecasted 7.1 percent growth in 2015, and that brought headlines about the “new normal” in the Chinese economy. Last week China’s leaders lowered that forecast again, to “about” 7 percent.

I think the slower growth rate in China is a long term positive. It’s more sustainable, which is good for China, the world and Caterpillar. China is -- and will be -- the largest construction equipment market in the world, and it’s a long-term market for us. That’s true for many other industries and companies, too.

We have over 30 facilities in China, most of them are manufacturing. We also have research and development centers and about 13,000 Chinese employees. Our strategy in China today is similar to our strategy in Japan in the 1960s – the best defense is a good offense.

We take on our competitors on their home turf, knowing that their goal is to compete with us in North America and around the world. Today in Japan, we – an American company – are one of the market leaders. Imagine that!

We both manufacture and sell in China; and most of what we make there, we sell there.

We’re seeing a pretty steep slowdown in Brazil, both economically and politically. But we like the signs coming out of Prime Minister Modi’s government in India; it gives us hope for greater opportunities there.

Of the BRICs, the Russian economy is the most volatile right now. During December, the Bank of Russia raised interest rates by almost 8 percent and the ruble was in free fall. It was the fifth rate increase in 2014, but it didn’t help the Russian economy – not in the face of falling oil prices and economic sanctions over Ukraine.

So, roads, bridges and pipelines still get built, they just get built by non-U.S. companies. In a global marketplace, sanctions are a major policy issue for multinational companies.

Last December, just as the President signed the bill authorizing increased sanctions in Russia, he also called for an end to five decades of unilateral sanctions against Cuba.

For almost 20 years, Caterpillar has strongly advocated for engagement, rather than isolation in Cuba. We’ve called on our government to lift the trade embargo because, in our view, the current policy hasn’t worked.

I’m very proud of Caterpillar’s historical willingness to engage on domestic and global policy issues. I can look back to a former Chairman’s outspoken testimony about currency imbalances in the 1980s. Currency issues, much like oil issues, never go away. In December, there was a Wall Street Journal op-ed about “The Double-Edged Dollar.”

Right now, the dollar is stronger than it’s been in years, which is good news and bad news. It’s tough on U.S. exporters but easier on importers and U.S. inflation. This certainly is a big issue here in Detroit.

I’ll run through other significant events more quickly. Taken one-by one, they are very disturbing. Taken together, they show a world as unsettled as it’s been in a long time.

We saw extreme violence in December. A gunman killed hostages in Sydney, Australia. The Taliban killed over 140 people, mostly children, at a Pakistan school; and Boko Haram killed 30 and kidnapped 200 people from a Nigerian village.

This is the same month when Sony Pictures’ was hacked, and they cancelled release of the movie, “The Interview,” after the hackers threatened violence.

Another recent speaker to our leadership team observed that as companies become more connected – and rely on the Internet for communication and commerce – they also become more vulnerable. So, as the Internet of things becomes ever more real, the need to protect against cyber-attacks becomes very real, too.

While I’m not sure we’re living through the most volatile time in our history, we must be close. This makes forecasts hard to do, and capital investments tough to plan.

However, there is a silver lining to volatility -- and that is that our management team, especially our younger leaders, is constantly learning how to manage in uncertain times. This is very good for the future of Caterpillar – as it would be for any company.

And believe it or not, there will come a time of greater stability in the future – and we’ll successfully manage through that, too. In fact, I hope you ask me to come back, then, to talk about managing global tranquility. Now, wouldn’t that be great? 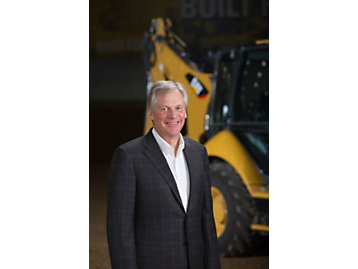