As previously announced, Caterpillar Chairman and CEO Doug Oberhelman served as Honorary Co-Chair of the 2014 China Development Forum (CDF), March 22-24. The CDF theme was “China: To Comprehensively Deepen Reform.” Over the course of three days, attendees discussed the additional transformations needed to secure a positive future for the people of China.

The forum provided Doug, along with business leaders and academics from around the world, the opportunity to interact with Chinese government officials and learn about the nation’s economic and social strategies. Doug delivered opening and closing remarks. In his closing remarks, he commended Premier Li Wei and all forum participants on a valuable forum.

“China is now at a critical point in its transformation and what has really struck me over these few days in Beijing is the resolve of the Chinese government to take on the challenge in a systematic way and by openly seeking and listening to input from the outside,” Doug said.

“China’s ambitious reform agenda will be challenging, but I believe international forums like this offer the opportunity for commercial leaders from around the world to show our support for your reform efforts, and to offer candid suggestions and feedback. All of the foreign companies represented here have a stake in the success of China and its full integration into this interconnected world.”

Click here to view Doug’s welcome video to CDF participants. Learn more about the outcomes of the 2014 CDF at cdrf.org.cn/2014cdf-en/.

While in country for the CDF, Doug also visited Xuzhou to celebrate the 20th anniversary of Caterpillar Xuzhou Ltd. (CXL), the first Caterpillar manufacturing facility in China.

“Starting from a joint venture in 1994, CXL has grown to be our flagship manufacturing facility in China, and has excellent operational results. The facility is among the best Caterpillar operations globally when measuring quality, safety, employee engagement and velocity,” said Doug. “CXL has been, and will continue to be, integral to Caterpillar’s growth and success in China.” 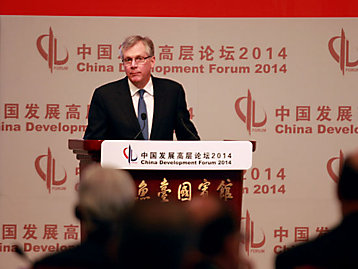