Family – a word that means different things to different people. But ask Tod Hetzel’s widow, Susan, about family and she will likely include names of Tod’s Caterpillar coworkers on her list. Tod was a Caterpillar engineer who lost a valiant fight to brain cancer in 2014; but his death is the smallest part of this story.

An avid bicyclist, fitness guru, trumpet player and doting father of two, Tod’s passion for perfection shined in every aspect of his life including his job at Caterpillar. Dedication, accountability and a stop-at-nothing attitude took Tod places. He contributed many innovations to Caterpillar along the way, two of which were filed for as U.S. patents – one for a proprietary counterweight system to enhance machine stability and the other for an improved cooling fluid-filling assembly.

Recent Caterpillar retiree Jerry Nuese met Tod in 1991 when the younger engineer was working on engine designs. A few years later, the two were on the same team, intently occupied with birthing the Next Gen D6. No matter that Jerry was the supervisor – coaching, life lessons and motivation flowed reciprocally between the two.

“We worked together on the same team for six years,” reminiscences Jerry, who presented Tod with two service anniversary pins during their working time together. “Late one night, I returned to the office and there was Tod, cranking away at his desk. He said, ‘Jerry, the release date is next Friday. I’ve got to get this done.’ That’s the kind of worker Tod was. Very dedicated. Always giving his best. Always.”

Tod’s fellow team members felt the same. When Tod fell ill, his coworkers rallied to encourage him and help keep spirits high. And when it came time to designate a serial number for the machines Tod had so diligently labored over, the choice seemed obvious. “The prefix on the tractor’s serial number is selected by the tractor team. We chose HZL for this generation of tractor to honor Tod,” says coworker and engineer Jenny David. “The entire team wanted to acknowledge Tod’s work and we were so happy we could present him with a tangible expression of how much we valued him and his dedication.”

Five years ago, the team presented Tod with a plaque representing the honor.

Today, tractors that bear Tod’s name are being built in East Peoria, Illinois. Susan Hetzel and family recently toured the facility to see the first HZL-serial-number tractor roll off the line. When talking about Tod’s work family, Susan’s eyes smile and her voice softens, “Tod enjoyed coming to work. He loved what he did. And he thought it was a huge honor to be recognized by his team in this way. At the end of the day, Tod felt like he was just doing his job … he always wanted to do his best for himself and others.” She pauses for a moment and then adds, “His team was like family both to Tod and to me.”

The HZL-serial-number tractors will be built over the next few years and sport the iteration of a cooling package designed by Tod. Given the average age of built-to-last Cat® machines at retirement, the HZL namesakes will likely be helping build a better world for generations to come. Though their loss is great, Tod’s family is comforted knowing his legacy lives on through his work, his team and now – those special tractors bearing his name. 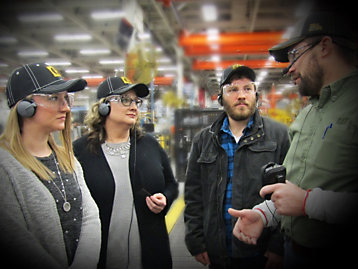 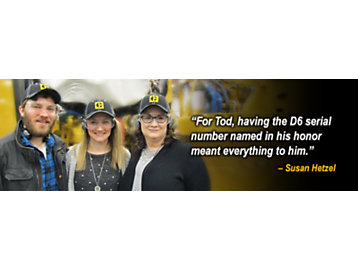