CATERPILLAR AND OUR DEALERS SUPPORT ‘BELT AND ROAD’ INITIATIVE

China’s ambitious project, “One Belt, One Road” is remaking global trade and nurturing geopolitical ties. Spanning over 60 countries, the project promises more than $1 trillion in infrastructure. As part of Caterpillar's Belt & Road initiative, our team in China is collaborating with dealers to help support a cross-divisional project that focuses on developing our sales and marketing capabilities in order to be best positioned for this opportunity. It was recently described as “arguably the most ambitious economic project in the 21st century in terms of physical and economic scale and geographic spread.”

As part of Caterpillar’s planning associated with the Belt and Road Initiative, Asia Pacific CIS Africa Middle East Distribution Services Division (ACAM) has developed a video describing how Cat dealers are best equipped to support Chinese customers as they do business along the Belt & Road route, with a focus on the projects in Africa (links below). As Construction Industries Group President Bob De Lange recently recently told China Global Television Network, "Caterpillar is a very strong supporter of the B&R Initiative. I think the key to success is to build partnerships and make sure that we have both a global approach and have been very strong locally."

For additional information and reporting about the Belt and Road Project, you can refer to this recent New York Times article on how the initiative will likely transform both the economic and physical landscape for years to come.

RECENT ONE BELT ONE ROAD HEADLINES 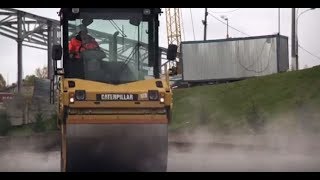