Caterpillar, Canada and a Commitment to Earning Customer Loyalty

We’ve been proudly supporting them,  along with Cat® dealers Finning and Toromont, since the early 1900s, when our predecessor company first set up office in Canada.

Here are five things you may not know about Caterpillar’s history in Canada!

1. Our first models in Canada were combine harvesters and steam-powered tractors.

Since early 1900s, western Canada was home to Holt Manufacturing Company offices, one of Caterpillar’s predecessor companies. Customers purchased models of combine harvesters and steam-powered tractors from the offices, and may even have met Benjamin Holt, inventor of the Holt Caterpillar track-type tractor during his visit in 1910.

The first documented sale of a Holt wheeled steam tractor in Canada was to the Namaka Farm Co., in Alberta, in 1909. It was a 60-horsepower machine that was used for agricultural applications. These early steam machines provided economical solutions to farmers by replacing horse and mule power.

The first successful sale of a Holt Caterpillar track-type tractor was to Elizabeth Farming Co. of Calgary in 1911.

3. The Cat dealers have delivered unrivalled service in the country for over 85 years.

Today, Finning Cat and Toromont Cat are the official Cat dealers in Canada. Finning Cat sells, rents, and provides parts and service for equipment and engines to customers in various industries including mining, construction, petroleum, forestry and a wide range of power systems applications. Since 1933, when Finning was first established in Canada by Earl B. Finning, they have stood for integrity, reliability and resourcefulness. Over the years, the company has grown as a result of a genuine commitment to earning customer loyalty.

4. We were there to help brave rescuers successfully recover miners at the Moose River Mine in Nova Scotia in 1937.

Heroic rescuers worked for 240 hours, pausing only long enough to eat and catch a short rest, to help the trapped miners survive. Four Caterpillar dozer tractors, owned by the Department of Highways, were sent to the cave-in when the first call for aid came. The rescue received worldwide attention as seen in archived newspapers in Caterpillar’s archives.

The four Caterpillar dozers pulled down buildings for timber to line the rescue shaft, while also hauling heavy equipment through creek beds and over rough trails to speed the work of rescue. The miners were eventually rescued, to the relief of their families and friends.

5. Our customers built the Canol Pipeline and Alaskan Highway with support from our products, services and dealer.

Caterpillar products supported the building of the Canol Pipeline that ran through Canada and the U.S. It was the first long-distance petroleum pipeline system constructed in the Arctic region of North America. The project was initiated during the early days of World War II, when the military situation appeared critical. Fearing disturbance of transportation bound for Alaska by sea, the governments of Canada and the U.S. agreed to build the pipeline to provide a more reliable oil supply to the northern region. Begun in 1942 and completed in 1944, the 620-mile pipeline route was abandoned after the war in 1945. The Canol Pipeline proved that construction projects on this magnitude could succeed despite the challenges provided by the Arctic environment.

Also starting in 1942, Caterpillar machines helped construct the Alaskan Highway, originally known as the Alcan Highway, stretching from Dawson's Creek, British Columbia, to Fairbanks, Alaska – a distance of 1,600 miles. Since the highway was a critical military supply route, U.S. Army Engineers and civilian contractors built the highway as a joint project in order to speed up the highway's construction. Completed in 1943, 70% of the equipment used on this project during its original construction displayed the Caterpillar trademark. Today, the Alaskan Highway is still the only road that connects Alaska with the road systems of Canada and the rest of the continental U.S.

Our Customers and team in Canada today

Although our Canadian Oil Sands and diamond mines are often in the spotlight, customers represent several key industries, including heavy and general construction, marine, mining, oil and gas, power generation and rental. With extreme temperatures, Canada is a popular testing ground for many of our machines.

In Canada, supporting customers and dealers is a Caterpillar team of over 200 employees with sales and support offices representing Solar Turbines, Cat Financial, and Americas Distribution, Services and Marketing. Our Resource Industries team is focused on autonomy and site technologies and supporting many of our large mining customers. Our Progress Rail and Kemper Value brands also have sales and service centers in Canada.

We look forward to many years ahead supporting our customers as they build a better world.

Advertisement for what would become the first Caterpillar dealer in Canada, 1924

Construction of the Alaskan Highway in 1942. 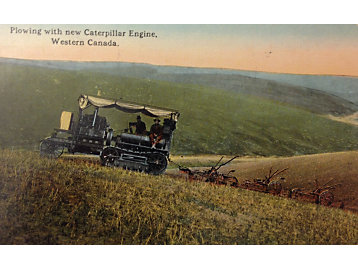 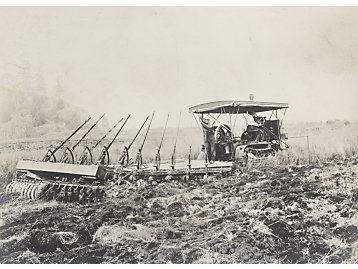 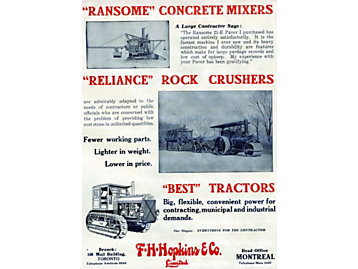 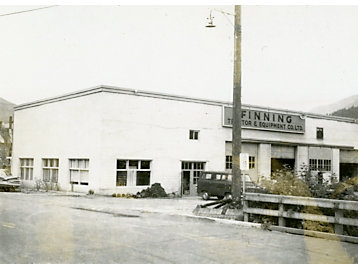 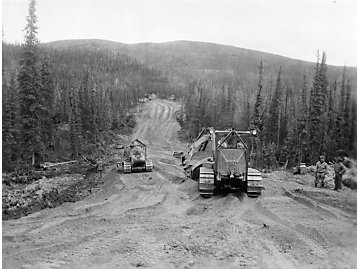 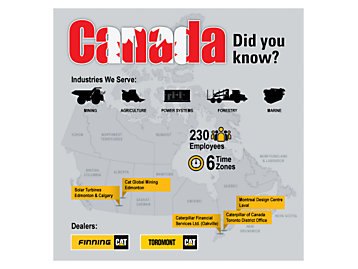