As the rain continued to fall and catastrophic flooding spread across many areas of Texas, rescue workers continue their work to aid in relief efforts. Right by their side were Cat dealers and Caterpillar employees.

“We delivered three new 745Cs (articulated trucks) recently to a local Earthmoving contractor, and they used the trucks throughout downtown Houston yesterday to help rescue people trapped on their roofs by the quickly rising water,” shared Beasley.

Mustang Cat, a Cat dealer in Southeast Texas, received a call from the Houston Police Department early Tuesday asking for an additional truck to help with rescue efforts and the delivery of food to isolated shelters. Mustang Rental quickly fueled and prepped a 740B (articulated truck) to deliver a few hours later.

The local Caterpillar and Mustang/Louisiana Cat family are partnering to assist first responders and law enforcement and, in the coming days, once flood waters rescind, they will shift into higher gear providing machinery and support for the very large recovery and rebuild efforts, Beasley said. Beasley spent the day on August 30 with Mustang Cat, aiding in the rescue efforts.

"We have all heard stories about how the products we design, build and support have helped to build many infrastructure projects around the world, and by extension, helped to make the world a better place,” said Brent Losey, product manager of Caterpillar Articulated Trucks. “However, it’s rare for us to see our products so directly and immediately impacting the lives of people in such a positive way.”

In addition to assisting first responders with rescue efforts, Mustang and Louisiana Cat are gearing up with light towers and portable generators available, and Mustang placed an order with Cat Work Tools for over 100 attachments – mostly grapples and buckets with thumbs – anticipating the clean-up that should start over the weekend.

Cat Financial is reaching out to customers in the impacted areas to offer support, such as extending payment deadlines.

On the Thursday prior to Hurricane Harvey making landfall, Caterpillar deployed 8,000 portable generators to Texas Cat dealers and Lowe's stores in the area, anticipating the increased need. The company is still deploying truckloads of these portable generators to the scene so the local stores have inventory on hand.

How You Can Help 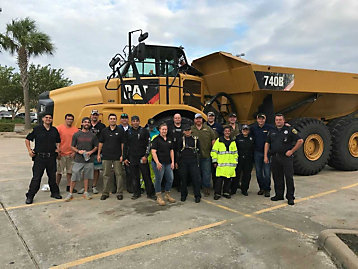 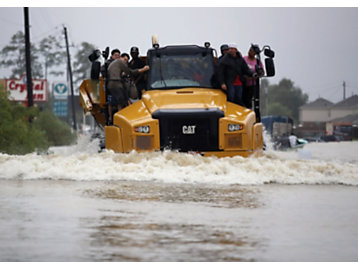 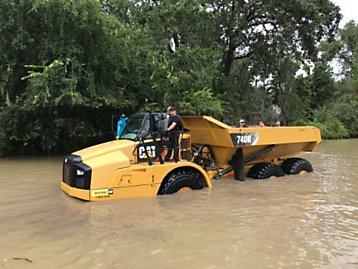 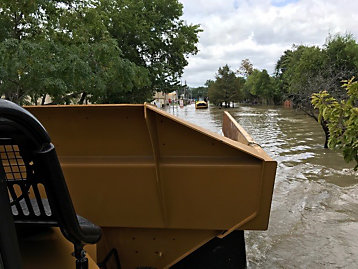