We heard the roar of a diesel engine as we started to walk into the Caterpillar Lafayette Welcome Center. That had to be our guests, but it wasn’t the big rig we were hoping to see. Instead it was a SUV driven by Mrs. Bonnie Scheidt. Her husband, Jerry, the man of honor, was riding shotgun. Seemed a bit odd that this man who had put over 3 million miles on his Cat® Engine would not be driving. When questioned about this, he simply answered, “I can’t drive that thing.” Guess the SUV isn’t the same as his 1989 Model, 3406B powered Freightliner.

This is the story of Jerry Scheidt, a former Air Force aircraft mechanic, a husband, a stepfather, a grandfather, a proud truck driver for the past 33 years, a huge fan of his favorite Cat dealer Cleveland Brothers, and quite possibly the most enthusiastic customer to ever walk the tour path at our facility in Lafayette, Indiana.

It is not every day a request comes into the Million Miler Club from a dealer for a driver with over 3 million miles on his Cat Engine. This is special enough on its own, but what makes Jerry’s situation even more unique is the relationship he has with Cleveland Brothers branch Service Manager Clay Callahan. The two have known each other for over 20 years, but if you ask them how long they have known each other, they laugh and say, “1.5 million miles ago.”  That was when Jerry came to Clay for his first overhaul. Amazingly his engine has only required two overhauls. It still has the original crank, lifters and cam shaft and the front covers have never been off of it!

Jerry states, “Cat is dependable. All it needs is air and fuel.”

Clay and his team do such a great job keeping Jerry on the road, Jerry won’t go anywhere else if any major work is needed. He tells us that Cat’s dealer support is wonderful. Being on the road, he has to stop at other places from time to time, but always goes to Cat dealers or TEPS dealers for minor service. Being a mechanic himself, he performs small jobs on his own but only buys Cat genuine parts. He religiously changes his oil once a month.

When Jerry purchased his truck on September 15, 1988, he never would have thought that he would one day be sitting in Lafayette, Indiana, with wife, Bonnie; his favorite service manager, Clay; Clay’s wife, Kallie; and several Cat representatives. We were all there for him, to thank him for his many years of dedication to the Cat brand and for being a loyal customer. He had mentioned to Clay that, being an engine enthusiast, he had always wanted to tour the factory: a simple wish that could be granted. His mind must have been exceeding the speed limit as he raced to ask question after question.

Jerry is an owner operator and has driven for many companies. He currently drives for Overbye Transportation out of Minnesota. Before driving his Cat powered truck, he owned a unit with a competitor’s engine. It had to be overhauled four times in four years. He has hauled all types of cargo including meat, heavy equipment, wood, general freight, and now mostly Polaris parts and products. He had a funny story to tell about a day when his dispatcher called him to pick up an unusual load. It was the Volvo of a fellow Overbye driver that only had 56 miles on it when it broke down. The oldest truck in the fleet had to haul back the youngest truck in the fleet.

When asked when he plans to retire, Jerry answered, “Never.” We also asked if he would come back and see us when he hits the 4 million mark and he said, “Yes, if I am still alive.” Bonnie then shared, “He wants to be buried in his truck with the stacks sticking out the ground instead of a tombstone.”

Here’s wishing Jerry many happy, healthy miles on the road!

3-Million-Miler Jerry Scheidt at his home base in Marengo, Ohio, with his wife, Bonnie Scheidt, and basset hound, Buster. 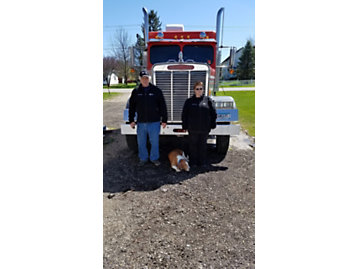 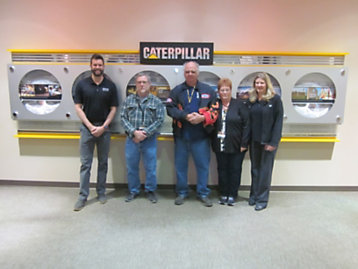