“Think about the courage that these guys had 60 days later to go to the market and offer shares of Caterpillar – a little company out in Peoria, Illinois,” said Chairman and CEO Doug Oberhelman.

Back in 1929, Caterpillar Tractor Company had net sales of $52 million and a little more than 7,300 employees, all in the United States. There were three products – a combine, grader and track-type tractor. You could purchase a Caterpillar model Sixty tractor for $4,175.

Some 85 years later, Caterpillar Inc.’s business portfolio includes more than 300 diverse products, with 2013 sales and revenues of more than $55.7 billion and a worldwide workforce of about 130,000.

In 1991, Caterpillar was added to the Dow Jones Industrial Average (DJIA), which is a price-weighted average of 30 significant stocks on the NYSE. Since being added to the DJIA a quarter-century ago, almost half of the other companies are no longer included in the average. Caterpillar is one of 17 companies remaining from that time period which is still included.

On December 22, 2014 Oberhelman, surrounded by Caterpillar leadership, will ring the opening bell on the NYSE, signifying 85 years of being publicly traded on the world’s foremost securities marketplace.

Oberhelman said he definitely won’t forget the story of how the company got there, "That’s great inspiration for me -- to think they did it in that environment," Oberhelman said, yet, "Here we are 85 years later bigger, stronger than ever."

"We can do anything," he concluded. "That’s why I like that story.” 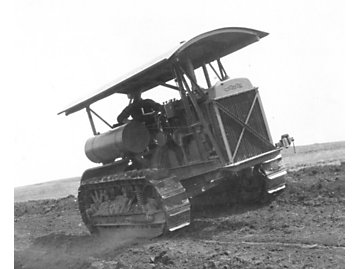