The Caterpillar Athens facility in the Building Constructions Products Division was in a celebratory whirlwind this spring. The Athens facility’s dedication to safety, corporate citizenship and sustainability resulted in being a three-time award winner for 2016!

2016 Georgia Manufacturer of the Year

At the 2016 Governor’s Awards Luncheon in April, Georgia Governor Nathan Deal honored three companies as Manufacturer of the Year for their excellence and contributions to the state's economy and their respective local communities. Caterpillar’s Athens facility won in the large manufacturer category (500 or more employees).

“Caterpillar is honored to be recognized by Governor Deal of the great state of Georgia as large manufacturer of the year,” said Todd Henry, operations manager at the Athens facility. “From our first meeting with the state economic development team and subsequent meetings with leaders from Athens-Clarke County, Oconee County, Athens Technical College and Georgia Quick Start, we quickly formed great partnerships and wonderful working relationships that have endured the test of time and paved the way forward for a very rapid and successful ramp-up of the Athens facility.

“And of course, most importantly, I want to thank all of our Caterpillar employees and their families,” Henry added. “For their dedication, sacrifice and commitment to working together as ‘One Plant, One Team’ to make the startup of our facility a success!”

Find out more about why Caterpillar Athens received this award in the June edition of Georgia Trend magazine.

Athens-Clarke County Manufacturer of the Year

Just days before receiving the award from the governor, Athens employees were recognized by Athens Clarke County Economic Development for their significant community involvement through United Way, Angel Tree and Jeannette Rankin Foundation. The facility was also honored for its economic impact on the community by employing a workforce of more than 1,700, two years earlier than planned, and its commitment to building up its workforce by developing key partnerships with educational organizations in the area.

Georgia Association of Manufacturers: No Lost Time Injuries and Lowest Recordable Frequency for 2015

Of the three awards Athens has received so far this year, Henry is most proud of this safety-related award from The Georgia Association of Manufacturers. The association awarded the Athens facility as first place winners for no lost time injuries and lowest recordable frequency for 2015. Henry credits the entire workforce for “embracing a safety culture of continuous improvement through initiatives such as the Quick Start training program, the BCP Safety Recipe and the Focus Four campaign, which not only enabled Athens to meet the aggressive ramp up plan, but did so with world-class safety.” 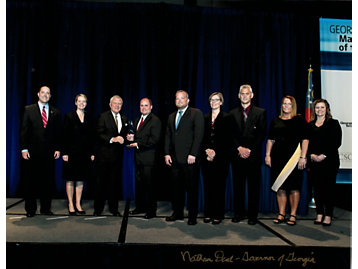