Longtime Caterpillar employee Jon Miller has dedicated his life to getting closer to his father – a man he never knew. He’s seeking his dad’s legacy and, in the process, building his own both in and outside of his job. Jon began a mission 27 years ago to reunite the men who served aboard a ship with a 100-year history, the USS Mullany. Jon’s father, Robert E. Miller, served as a lieutenant aboard the vessel during World War II. Over the years, Jon has had the opportunity to befriend his father’s shipmates.

Jon, who works as an information technology manager - has heard many stories about how his dad was a “good officer” who was “kind to his men” and how he was known for sneaking ice cream to his crew. Although Jon started his crusade to learn about his father, his focus to honor the thousands of veterans who fought for freedom remains. Jon recently brought shipmates, dating back to 1943 and serving a variety of roles around the ship, together for a reunion in Peoria, Illinois, where they toured a local Caterpillar facility and spent an afternoon at the Caterpillar Visitors Center. Watch the video here. 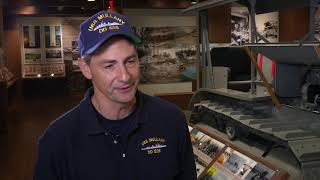