Caterpillar Chairman and CEO Jim Umpleby has been named 2019 International Executive of the Year by The Executives’ Club of Chicago. The award recognizes an individual’s exemplary values-based leadership and significant contributions to their company and the global business community.

Regarding the award, Jim said, “I am honored to accept the International Executive of the Year award on behalf of the entire team at Caterpillar. It is their drive, ingenuity and passion for serving our global customers that makes Caterpillar successful. I’m humbled to lead this great company.”

Jim will accept the award on May 15.

The Executives' Club of Chicago is a membership and networking organization focused on senior executive networking, development and innovation.

Given annually, the International Executive of the Year Award is considered The Executives’ Club of Chicago’s most prestigious honor. Former award recipients include executives from The Coca Cola Company, Unilever, and Northern Trust as well as former Caterpillar Chairman and CEO Donald V. Fites. 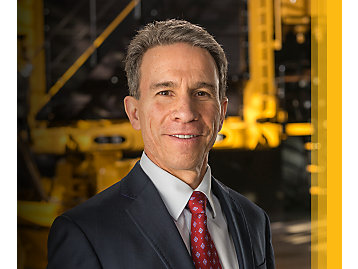