The Final Countdown to a Finished Robot

Caterpillar has reported weekly on the progress of our Caterpillar-sponsored and mentored FIRST Robotics Competition teams as they complete the robotics “build season” – an intense six-week window where high school students are presented an engineering challenge and are required to design, build and program a workable solution from scratch.

As the teams complete their final days of robot construction, we checked in on the California-based “SuperNURDs” for a final report.

During the sunny days of the long awaited President’s Day four-day weekend, the students and mentors of The SuperNURDs from San Pasqual High School in Escondido, California, were not hitting the sandy shores of San Diego. Instead of sand volleyball, these students are focused on finalizing their preparation for what is often called the “Varsity Sport of the Mind.” As they near the end of the six-week FIRST Robotics build season, getting the robot fixed and finished is the name of the game.

The deadline: Robotics teams around the world must “Bag and Tag” their robot by 11:59 p.m. on Tuesday, February 23, effectively sealing off their robot until competition. Because of the staged timeline of the global tournament season, this “Bag and Tag” process ensures that all teams are given equal time to work on their robots.

Unfortunately for the SuperNURDs – and their engineering mentors from nearby Solar Turbines – Tuesday would not be the only midnight they would see. During one evening work session this week, the team’s lead programming mentor announced, “The earliest we will get out tonight will be midnight. We just had critical failure in the program.” Following the audible sigh throughout the workspace and then an intense two-hour delay, the lead student programmer Tyler Warren explained, “We experienced a critical failure known as a stack overflow, which was putting the robot on an infinite loop. Without our version control, which allowed us to pinpoint the bug and fix it, we likely wouldn’t have been able to recover.”

Version control and redundancy isn’t just helpful for the Programming Team; the Mechanical Team is using a duplicative strategy to their advantage too. Because of the “Bag and Tag” rule in FIRST Robotics, many teams construct two matching robots, locking up their competition robot but still allowing the team to practice driving, scoring and maneuvering with a practice version. This week, the SuperNURDs’ Mechanical Team finished construction on the practice robot and began powder coating the competition robot – to give it a durable, finished look for the tournaments.

Meanwhile, the Electrical Team finished wiring the practice robot and dove right into getting the competition robot up to spec. In the words of the students, they took the time to “robustify” the electrical board. For those of us who don’t speak geek, that means they made sure the electrical board could withstand the strain of the robot’s movement during competition as well as potential contact from any other robot in the field. Team member Blake Hobbs noted that this year’s game will be a full contact sport and “after the fifth iteration of the robot, I feel like we finally nailed down everything from accessibility to durability at a competitive level.”

While final construction efforts buzzed in the background, the Business Team focused in on their marketing for this year’s tournament season. With the creation of a new superhero-themed sticker the team members will promote their team pride and differentiate them from the competition.

The activity of this year’s build season has meant many late nights for the The SuperNURDS, pushing their intellectual design, engineering and sleep limits. But with the adrenaline that comes with the final countdown, the team is looking forward to this Saturday, where they will take their robot to a pre-Bag and Tag scrimmage to test out the entire system. 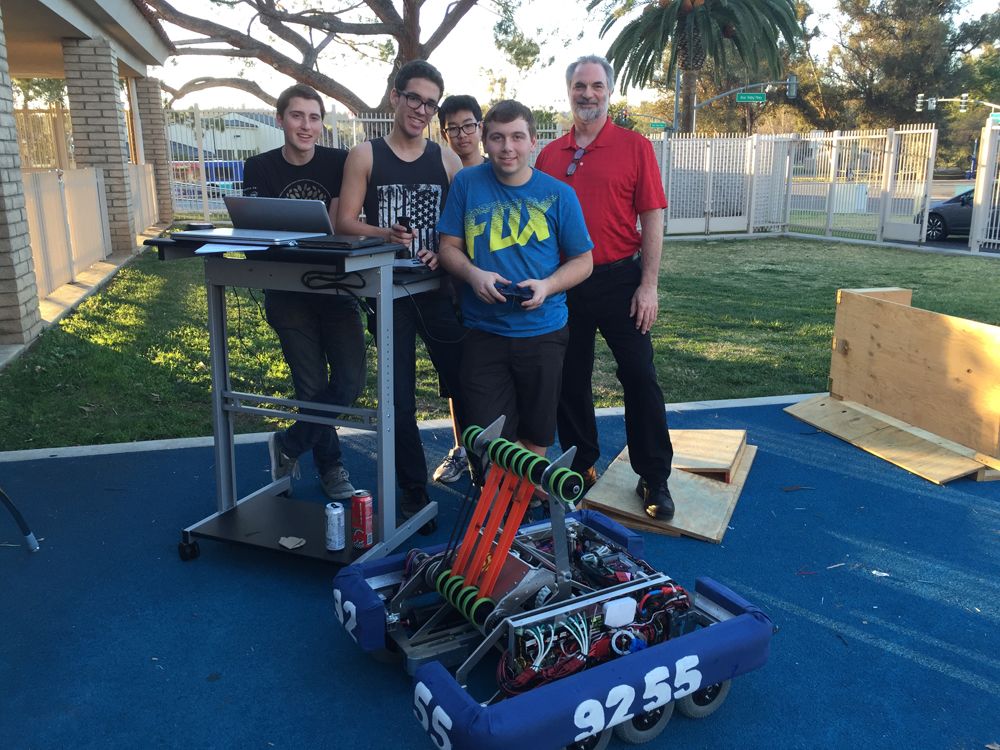 Located to the northeast of San Diego, California, Team #3255 The SuperNURDs are competing in their seventh season of FIRST Robotics.  The team has grown to 30 students from San Pasqual High School in Escondido, California, with a mixture of expert veteran students and a healthy batch of rookie students eager to learn.

The team has been mentored by engineers Oscar Jimenez, Gus Mendez and Dan Glenn of Solar Turbines. To these mentors, the team is “more than just building a robot. It is about teaching valuable skills in a positive learning environment where each student is made to feel like a member of a family, regardless of their financial or personal background.”

FIRST Robotics allows students to get a true taste of the engineering process. The students are given a task with seemingly infinite possible solutions, but must choose one that balances the goal of the game with the rules, time and space constraints.

The number of STEM graduates has steadily declined since 2003 and highly skilled jobs in these fields continue to go unfilled in the U.S. – a major concern for Caterpillar.