California Highway 1 is a landmark roadway hugging the Pacific coast for some 650 miles – stretching from Northern California, across San Francisco’s Golden Gate Bridge and ending south of Los Angeles. With breathtaking views of rugged coastlines, stunning ocean and mountain vistas, and the lure of soft, sandy beaches, no wonder millions of tourists visit annually.

Initially built in piecemeal fashion – segment by segment – the collective route was designated California State Road 1 in 1964, although portions have been open since the 1930s.

Near this region, in a town called San Luis Obispo, is where John Madonna was born and raised. A second-generation contractor and Caterpillar customer, John remembers weekend drives with his parents and sisters along the iconic stretch of highway. John’s father, Alexander, was a large contractor who worked state-wide building California highways, bridges and dams, including construction on Highway 1. Through the years, Alex owned more than 100 Cat® D8s. 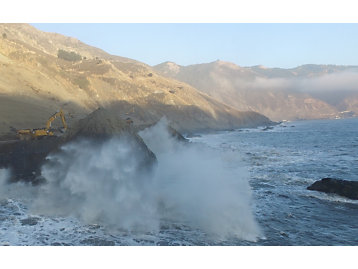 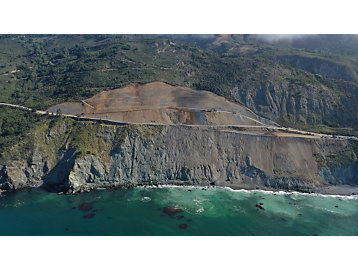 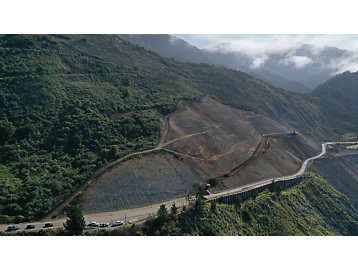 John went to work for his dad in 1975. While still attending college in 1978, John formed his own company, focusing on engineering as a utility contractor. Today, John Madonna Construction (JMC) has been moving dirt for more than 40 years and has expertise in demolition, earthwork, and underground utility construction. The work seems ideal for John – a way to earn a living while caring for the land he holds dear.

With Highway 1 in particular, there’s always work to be done. Built so close to the ocean and much of it laid on winding ledges carved into steep mountain faces, the road needs continual maintenance even during “normal” weather. Add seven years of drought followed by a season with triple average rainfall, and you have a recipe for disaster.

And that’s just what happened in early 2017 – two catastrophic mudslides hit the Big Sur stretch of road near John’s hometown. The larger of the two, dubbed the Mud Creek slide, was of historic and epic proportions. On May 20, 2017, at 10 p.m., the slide brought down 8 million tons of material down the face of the mountain in about five minutes, creating 16 acres of new California coastline.

According to witnesses, it sounded like a bomb exploded.

At the time, John’s company was working on a Highway 1 project to build retaining walls near a stretch of roadway known as “The Elephant’s Trunk.” So, when these two slides occurred, John Madonna Construction was the obvious choice for client California Department of Transportation (Caltrans).

During the reconstruction period, John’s day started before sunup, studying detailed geological reports generated by radar and ground-based systems that scan the slope and monitor ground movement. This helped ensure the safety of his crew – a top priority, as is being a careful steward of the environment.

“Well, it wasn’t like there was a clear-cut answer about how to fix Mud Creek because it’s such a sheer straight up and down area. So, placing the highway where it was before the slide would never work. In years past, they took a lot of dozers to the very top, and started pushing dirt down the mountain, adding benches wherever they could. If we’d done that with Mud Creek, it would have been a 2-year project. Plus, it would have made an unnatural scar on the side of the mountain, and it’s not environmentally friendly to push dirt into the ocean,” John says, noting that the team took care to protect shellfish in the area, especially the black abalone – which is an endangered species.

“Even though they call it ‘Mud Creek,’ the landslide itself wasn’t really muddy. It was more of a rocky or sandy stone. And, the earth had moved so quickly that it self-compacted to a large extent. Turned out, it was a suitable highway bed.”

Ultimately, the team decided to add 80,000 tons of riprap (large stones) to buttress the newfound land and build the replacement highway over what had been water before the mudslide. If deciding on a plan was difficult, the work to build the road was even more so.

“I really have to take my hat off to the people, both employees and subcontractors, who worked on this project. It wasn’t easy. We had a crew of 40 – 50 people, most of them working a minimum of 12 hours a day, seven days a week,” John says.

Of course, when the crew was working 12-hour days, so was John’s equipment – a fleet of predominantly Cat® machines built to get the job done.

When asked, “Why Caterpillar?” John’s answer comes quick and easy, “Equipment maintenance is critical when you’re operating 12 hours a day, seven days a week. One reason I choose Cat equipment is the ability to monitor equipment. On the Highway 1 project, we could see fuel levels and plan our maintenance schedule. And if we had a problem, we could call on our Cat dealer Quinn. They have the experience to help problem-shoot and get parts to us quickly – usually within a day. It’s a very valuable resource that makes Caterpillar stand out.”

John’s affinity for Caterpillar stretches back in time.

“When I was in college, I wrote a class speech on why Caterpillar is the machinery of choice. I think I compared it to a Komatsu or something. At that time, I was focused on resale ability.

‘Today, it’s also market recognition, cutting-edge technology, ability to monitor maintenance and the service we get from our dealer Quinn. Last but not least is the value you end up with. You can pick up a piece of Cat equipment, use it and when the project is done, the resale value is solid – and it’s a big part of the profitability of a job.

‘Really, the most important thing at the end of the day is the value we end up with Cat.” 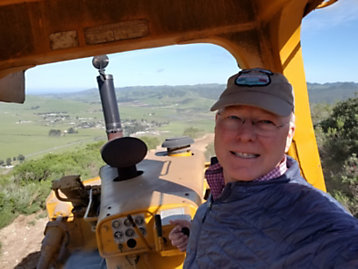 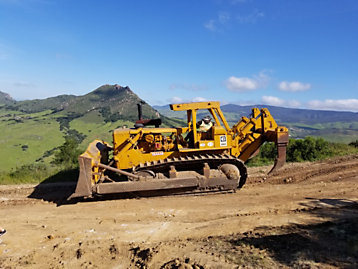 A Passion for Machines

John’s love for machines goes back to his childhood when his dad, also a loyal Cat customer, owned and operated big yellow machines. “We have a family portrait, and one of the pictures is my dad running a Cat dozer, cutting in a new road on top of the San Luis mountain some 50 years ago. The dozer was a brand new D9 – and I still have that machine today. It’s in great shape, a beautiful tractor and still runs really well.

‘I actually took that D9 back on the mountain last year. The road had gotten rocky. So, I took that old dozer back to where it first came into San Luis and spent two or three days recreating the road.”