And the Oscar Goes to: The “Tractor Actor” 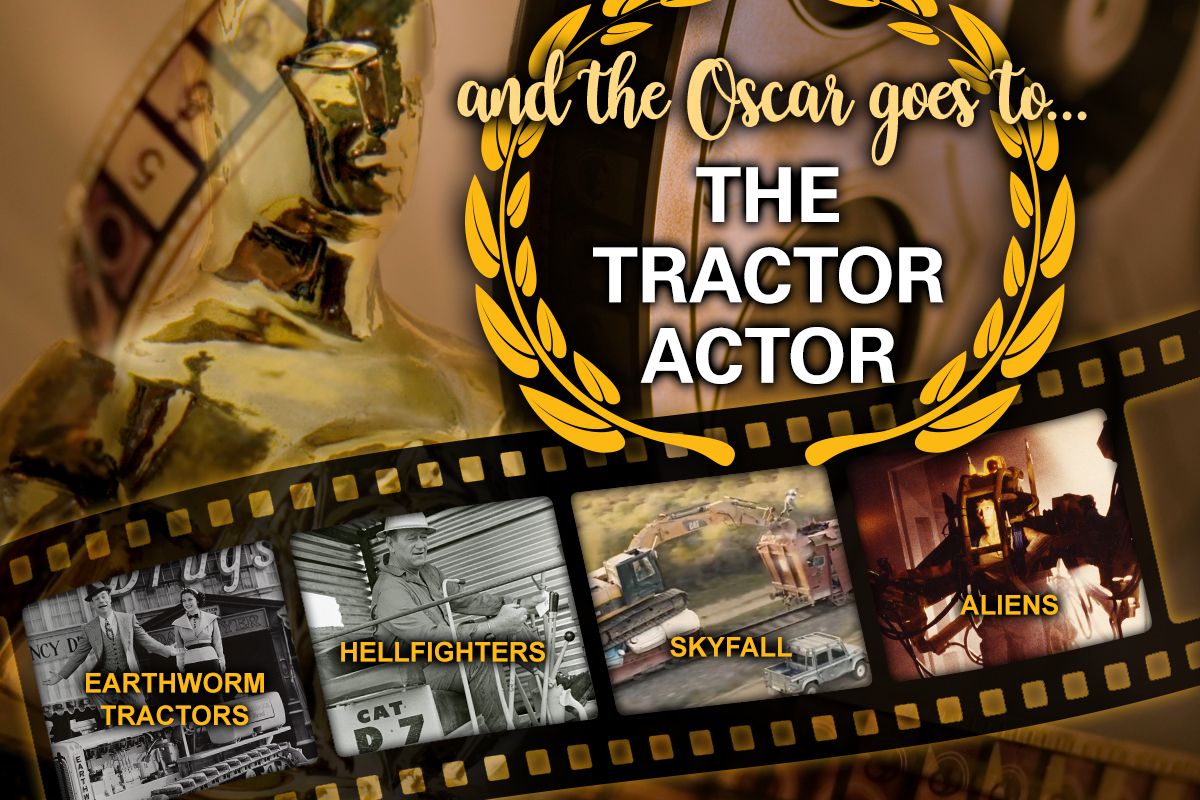 Caterpillar’s yellow iron has found itself in many movie roles throughout the years, from silent films to modern big-budget blockbusters. You’ll find our cinematic cameos as far back as the 1920s, through Hollywood’s Golden Age, and right up to the present day. In fact, there are probably too many movies to list; so instead we’ll give you a few of our favorites. 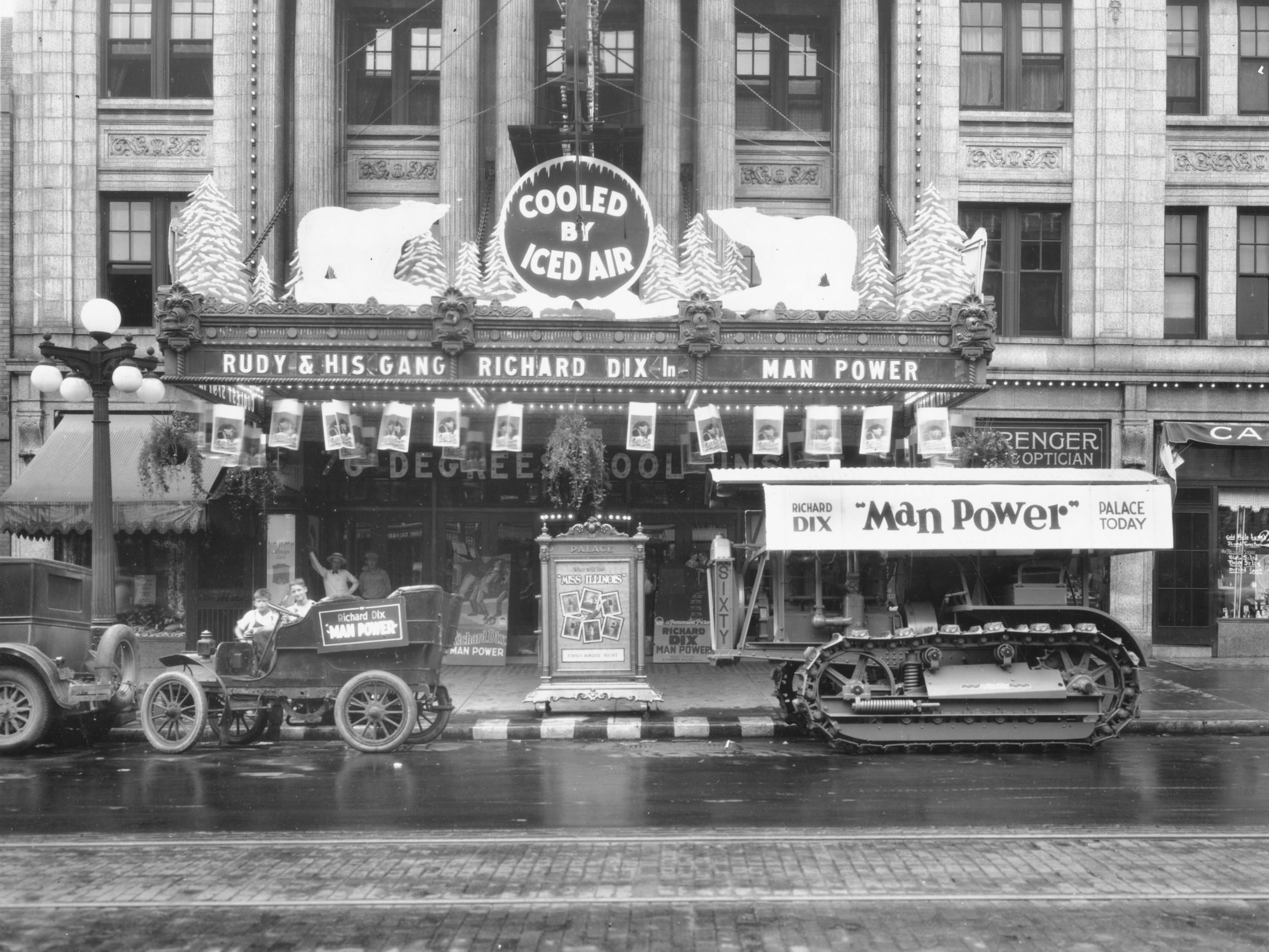 Richard Dix and Mary Brian, both big stars of the silent screen, were the heroes of the Paramount movie Man Power. Most people today have probably not seen this movie, but it is likely the oldest film featuring a Caterpillar machine, and that immediately makes it our favorite.

Although Dix and Brian occupied the leading roles, the real star was, of course, a Caterpillar tractor. Got to Love it!  In the movie, the town of Happy Valley is threatened by a breached dam that’s about to burst. Enter our hero! A Holt 10-Ton Caterpillar tractor climbed a slippery hill and dragged wagons filled with dynamite safely away from the dam site. Then, it was heroically driven into the breach in the dam, plugging the hole, averting catastrophe, and saving the citizens of Happy Valley.

Because the heroic machine gave its life for the townspeople, a smaller Holt 2-Ton Caterpillar tractor was used for the film’s advertising posters. Caterpillar Sixty tractors were also strategically placed in front of theaters from Oakland, California, to Peoria, Illinois. Caterpillar was so taken with this movie we told our dealers to encourage full attendance when the picture was shown in their home towns, saying that the movie was an excellent opportunity for publicity because it was a “thoroughly Caterpillar picture.” 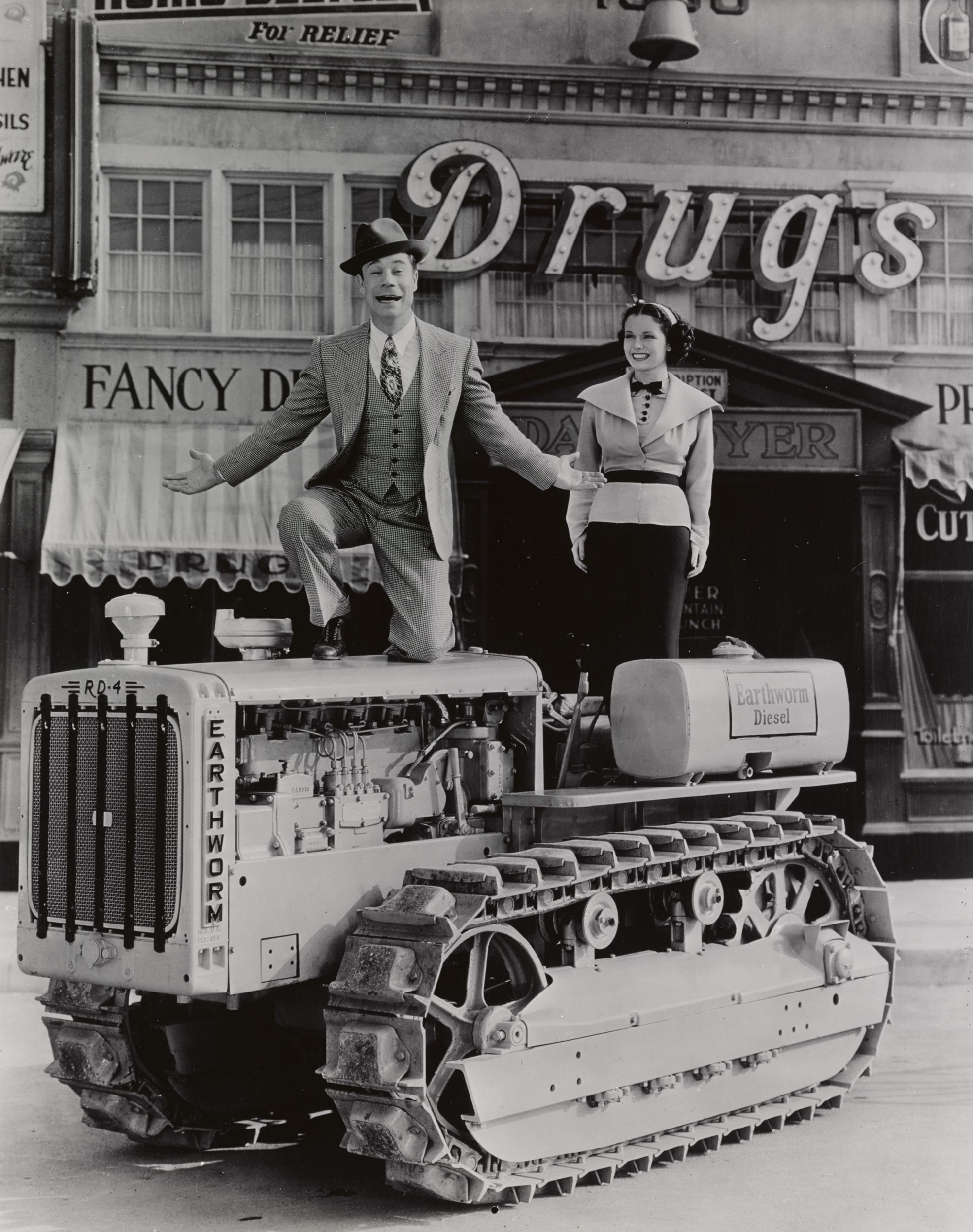 Earthworm Tractors tells the tale of Alexander Botts, a novelty gadget salesman in love with a girl in his hometown. To win her heart he decides to sell something “worthwhile”, and through a series of comical events is hired as a tractor salesman for the Earthworm Tractor Company of Earthworm City, Illinois, a thinly-veiled version of the Caterpillar Tractor Company from Peoria. Botts’ work eventually leads to the sale of several large Earthworm tractor orders and a touching romance with a customer’s daughter.

William Hazlett Upson, a former employee of Holt Caterpillar in Peoria, Illinois, created the character of Alexander Botts. Botts proved immensely popular with the American People, and Upson wrote more than 100 stories featuring his exploits with the Earthworm Tractor Company for the Saturday Evening Post from 1927-1974. Upson loosely based his stories on his personal experiences with Caterpillar and its sales team.

Warner Bros. studios capitalized on the success of Upson’s stories by filming Earthworm Tractors in 1936. Caterpillar provided four diesel RD model tractors for use in the movie, and part of the action was filmed inside the Caterpillar East Peoria plant. On July 14, 1936, the City of Peoria hosted the world premiere of Earthworm Tractors at the Madison Theater. Not only was this the city’s first world premiere, but Peoria, our home, earned the distinction of being the first city in the United States to host a movie premiere outside of Hollywood and New York City. 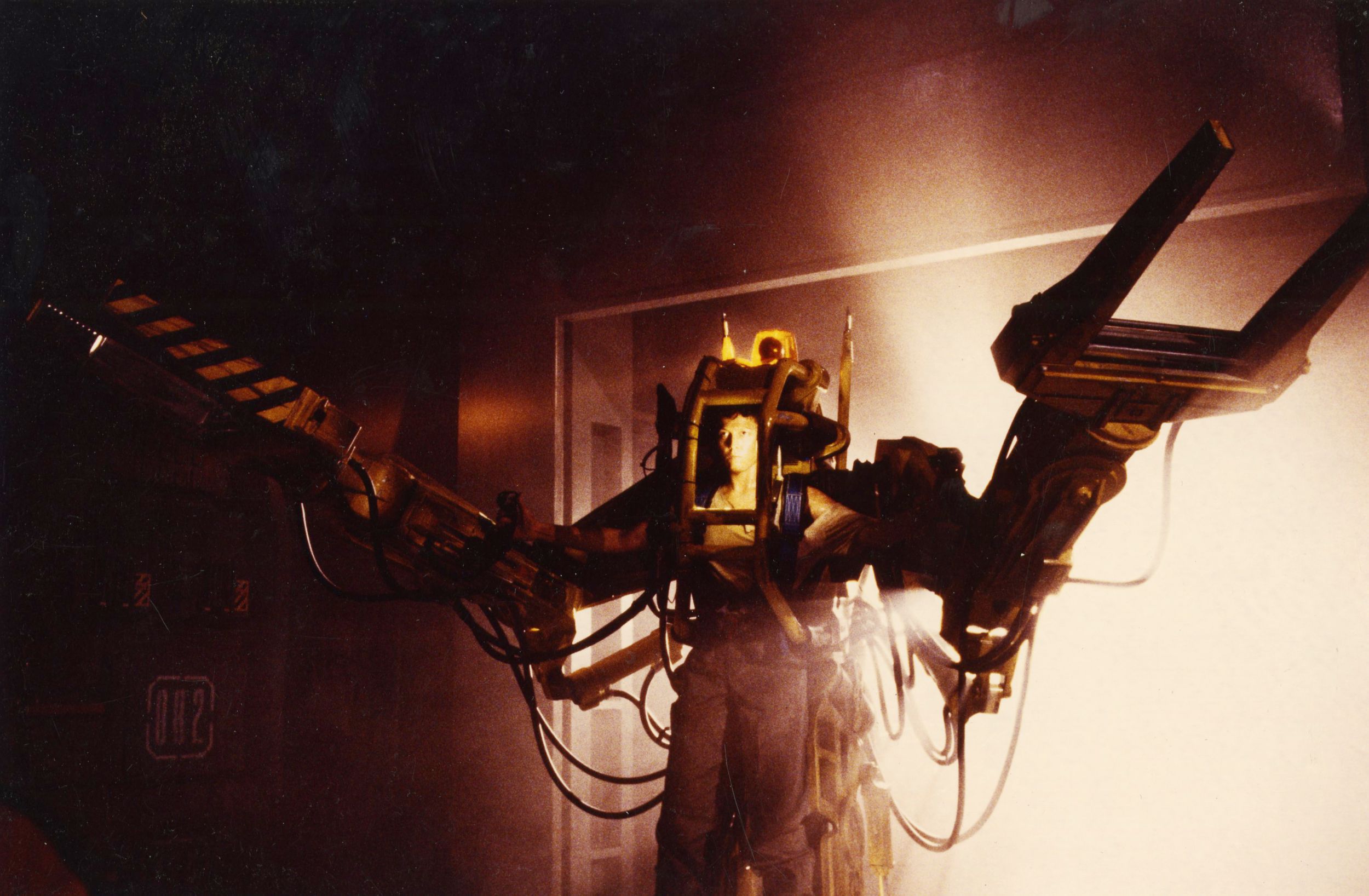 Cat Power Loader on display during the filming of Aliens.

Alien was a 1979 British-American science-fiction horror film directed by Ridley Scott and starring actress Sigourney Weaver. Audiences at the time will always remember it as one of the scariest movies they’ve ever seen. For its 1986 sequel, Aliens, Twentieth Century Fox Productions contacted Caterpillar about using the Caterpillar name and logo on the machine Weaver would use to battle the Alien Queen.

After reviewing the movie company’s plans and checking with patent attorneys, Caterpillar gave the go-ahead. A Caterpillar promotions manager said, “They wanted to create a futuristic machine and give it some high-tech credibility, so they named it the Cat Power Loader. We didn’t have anything to do with constructing the machine – it’s completely fictitious. But the designer must have done a good job because we’ve had calls from people wanting to buy one.”

Cat 320D hydraulic excavator that was used in the filming of Skyfall.

In Skyfall two iconic brands, James Bond and Caterpillar, came together for Metro-Goldwyn-Mayer’s 23rd Bond adventure. The Bond films are known for their action-packed opening sequences, and Skyfall was no exception. This time, the always-thrilling sequence featured James Bond, played by Daniel Craig, operating a Cat excavator while riding on a speeding train.

Caterpillar prides itself on designing and building equipment to meet customers’ needs. In this case, their needs were quite unique and required extensive customization. In order to put Bond “in the driver’s seat” while still allowing for a real operator to work the machine, we moved the cab to the opposite side of the 320D L, while keeping the real controls in place.

“The cab switch, required for the location of the shoot and interaction between characters, took several months of pre-planning,” said a Caterpillar communications manager. “The biggest challenge involved changing the electronics and hydraulics to accommodate the cab on the other side of the machine.”

Ultimately, two modified Cat 320D L excavators were produced in Caterpillar’s Akashi, Japan, plant for Skyfall. At least one of these machines is still around, and if you look closely enough you can see the bullet holes in the cab put there during filming.

John Wayne played Chance Buckman in the Universal Studios movie Hellfighters, and you’ve got to love any movie with “The Duke.”

The movie was based on the experiences of Paul “Red” Adair, a legendary fighter of oil well fires. Adair, who responded to fire alarms from practically every oil field on earth, was a technical adviser for the movie. When fighting real oil field fires he used Caterpillar tractors, but during the initial filming discussions the movie makers did not attach any importance to the kind of tractors used in the film. Adair, however, was adamant that a certain type of “tractor actor” would be necessary if the picture were to be authentic. He told Producer Robert Arthur, “If I could get Caterpillar machines in the Sahara, you should be able to get them in Houston.”

Calls were made to Caterpillar in Peoria. Mustang Tractor and Equipment Co., Caterpillar’s Houston dealer, arranged to deliver four big yellow crawlers – all appropriately veteran machines – to the set. Later, a scenery shift required the filmmakers to move to a location near Casper, Wyoming, where they built yet another oil field set. This time, they did things right from the beginning, and five different Caterpillar-built crawlers were supplied by Wortham Machinery Company, the dealer in Wyoming, for the sake of authenticity.

Each week, Corporate Heritage Services opens its historical collection to share stories of our people and to chronicle over 90 years of innovation.