In 1931, the world was in the middle of the Great Depression. It was the deepest and longest-lasting economic downturn in the history of the industrialized world. Consumer spending and investments dropped, causing steep declines in industrial output and rising levels of unemployment as failing companies laid off workers.

In 1931, Caterpillar was feeling the effects, as sales were down over $7 million from the year before. This did not halt the company’s commitment to innovation. The innovations of 1931 are still relevant to Caterpillar’s business today.

In 1931, Caterpillar released the industry's first true motor grader – the Auto Patrol. The development of this iconic product dates back to 1928, when Caterpillar acquired the Russell Grader Manufacturing Company and created a new Road Machinery Division to address motor grader development. Russell blade graders were frequently paired with Caterpillar tractors, so Russell and Caterpillar leaders explored opportunities to partner and expand their product lines. In April 1931, Caterpillar introduced the industry's first true motor grader – the Auto Patrol – different from motor patrols in that it was designed as one machine instead of a separate tractor with a grader frame fitted around it. Today, Caterpillar produces motor graders around the world at the North Little Rock, Arkansas facility, the Decatur, Illinois, facility, Caterpillar Brasil Ltd., Caterpillar Suzhou Company Ltd. and Shandong SEM Machinery Co., Ltd.

"Old Betsy" was the nickname given to the hand-built prototype of Caterpillar's first diesel engine model, the D9900. Research and development actually started as far back as 1927. What inspired Caterpillar leaders, such as C.L. Best, to keep investing in diesel technology during the Great Depression and at a time when tractor companies were consolidating was the recognition that the engine was superior to its gas counterpart. Diesels generated massive low-end torque while consuming roughly half the fuel of a gas engine. Under the direction of Caterpillar engineer Art Rosen, the engine was assembled on June 28, 1930, in San Leandro, California. She was given the serial number 1A14 and was used in tests for more than 16 months before the engine was deemed ready for production by late 1931.

The engine was first used to power Caterpillar tractors and eventually power units. In October 1931, Caterpillar began producing its first diesel tractor model – the Caterpillar Diesel Sixty Tractor. Caterpillar realized that it was only a matter of time before the diesel crawler would catch on. By the mid-1930s, Caterpillar was the largest producer of diesel engines in the world, making diesel technology the backbone of our business.

This historic innovation started as an experiment, this time involving paint and color. The mission was to determine a uniform color for our products. Tests narrowed down to three colors: a shady yellow, a flash red or a white. The aim was to find the color that would be visible at the greatest distance by day and night and yet be pleasing to the eye. When the tests were over, yellow was chosen and paint specialists devised the distinctive Caterpillar yellow for exclusive identification of our machines. On December 7, 1931, gray paint with red trim was replaced with Hi-Way Yellow with black trim. Today, we call our paint Caterpillar Yellow.

In 1931, Caterpillar introduced its second trademark design. The Caterpillar trademark has evolved since the brand’s establishment in 1925. The first trademark was originally used by the Holt Manufacturing Company, one of Caterpillar’s predecessor companies. Affectionately called the “Wavy Logo,” the first trademark consisted of the company’s name itself written in a loopy handwriting, resembling a crawling larva. The second trademark, which was red, had a more contemporary design. Although it was tweaked overtime, this design remained relatively the same until 1957.

Eighty-five years have passed since 1931, a year when significant progress was made and the guiding principles for what our company is today would be founded. Not unlike 1931, Caterpillar is facing similar challenges today – just another reason innovation is key to the life and longevity of the company.

Caterpillar Diesel Sixty serial No. 1C3 on display in the Caterpillar Showroom at Building HH in East Peoria.

As a way to save customers money, a conversion kit was created to convert a tractor from gas to diesel.

As a way to represent its second trademark, Caterpillar's new mark adorns this Kleenex box dispenser. The dispenser could be attached to a dashboard. 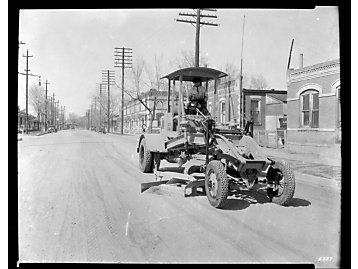 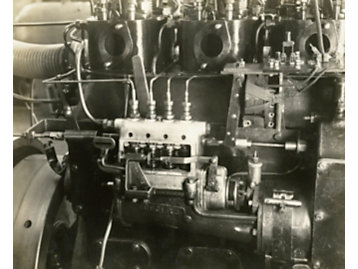 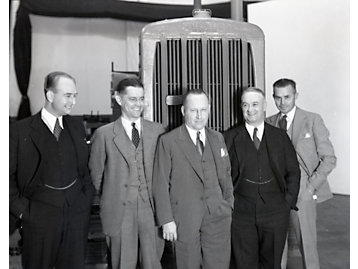 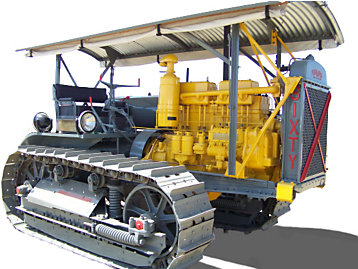 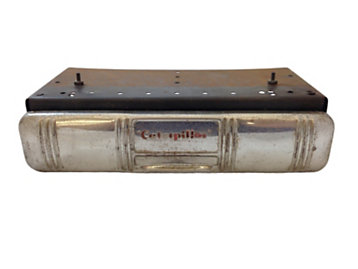