Ed works on Caterpillar’s HR team and has had an interesting path to Caterpillar, helping lead global labor relations for large global companies. Notably, too, he is a veteran. Despite Ed’s unique and varied experiences, he says there are more parallels between civilian work and military service than people may think.

Ed entered U.S. Army active duty in 1982 as an infantry officer and went to flight school after completing the infantry course. As a pilot, Ed flew approximately 1,900 hours, primarily flying the OH-58 (Jet Ranger) and UH-1 (Huey) on the helicopter side and King Airs (KA-90 and Super 200) on the airplane side. During his seven active Army years, his primary duty stations included Uijeongbu in South Korea, White Sands Missile Range in New Mexico, and Hunter Army Airfield in Georgia. During his time in the military, Ed saw a commitment to diversity and inclusion. He sees it again in his current role.

“At the time, it also felt very progressive and was something special,” he said. “We worked in a true cross-section of society as a cohesive team — we all depended on each other, and we were only as strong as our weakest link. It was a simple approach and eliminated barriers.”

Ed said his experiences in active and reserve duty continue to shape his work today.

“It’s part of your personal journey and one piece of who you are,” he said. “It’s probably common to have an affection to where you call home. I’m no different, so for me, it was a privilege and honor to serve this country.” 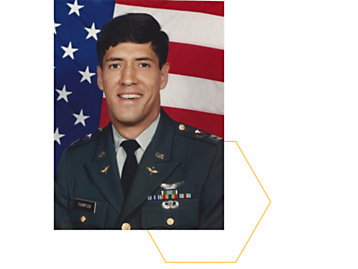