Honoring and Supporting Our Veterans

Caterpillar’s new director of labor and employee relations, Ed Thompson, has had an interesting path to Caterpillar, helping lead global labor relations for large global companies such as Kimberly Clark and Kellogg’s. Notably, too, he is a veteran. Despite Ed’s unique and varied experiences, he says there are more parallels between civilian work and military service than people may think.

“There are quite a few synergies between civilian work and the Army around prioritizing, organizing and planning,” he said. “The Army follows a format called the ‘Operations Order,’ which is broken down into: Situation, Mission, Execution – with alternatives – Service Support & Command, and Signal – communications. You see some of those same or similar elements in general business planning.”

Ed entered the U.S. Army active duty in 1982 as an infantry officer and went to flight school after completing the infantry course. As a pilot, Ed flew approximately 1,900 hours, mostly flying the OH-58 (Jet Ranger) and UH-1 (Huey) on the helicopter side and King Air’s (KA-90 and Super 200) on the airplane side. His main duty stations during his seven active Army years included Uijeongbu in South Korea, White Sands Missile Range in New Mexico, and Hunter Army Airfield in Georgia. Another similarity Ed sees between these experiences and his current work is a commitment to diversity and inclusion.

“At the time, it also felt very progressive and was something special,” he said. “You worked in a true cross-section of society as a cohesive team – we all depended on each other, and you were only as strong as your weakest link. It was a simple approach and eliminated barriers.”

Ed said his experiences in active and reserve duty continue to shape his work today.

“It’s part of your personal journey and one piece of who you are,” he said. “It’s probably common to have an affection to where you call home. I’m no different, so for me, it was a privilege and honor to serve this country.”

Caterpillar Labor and Employee Relations Director Ed Thompson (pictured here in South Korea) entered the Army active duty in 1982 and went on to fly approximately 1,900 hours as an Army pilot.

Ernie Reyes, global chair of Caterpillar’s Armed Forces Support Network, served in the U.S. Marine Corps and Navy for 21 years before joining Caterpillar as a strategy manager in 2016. 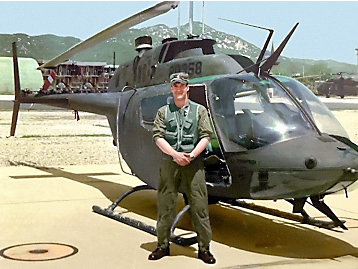 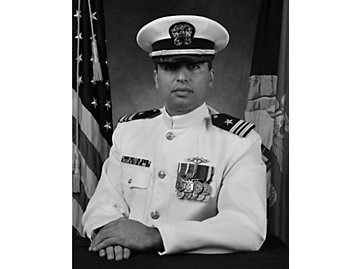 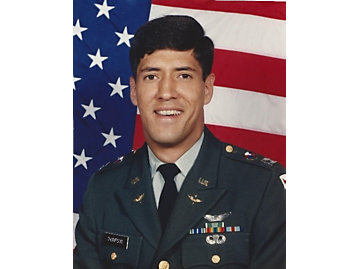 Caterpillar’s Armed Forces Support Network (AFSN) employee resource group (ERG) works with veterans, their families and allies to ensure that the veteran community has resources and support necessary for fulfilling lives inside and outside Caterpillar.

“We’re passionate about everything our veteran community does. We’re committed to supporting veterans through their entire journey – including their transition into the corporate world and leadership development,” said Ernie Reyes, who served in the U.S. Marine Corps and Navy for 21 years before joining Caterpillar in 2016. Ernie is now a supply manager for North America and Europe and serves as the global chair of AFSN. He also sits on the advisory board for the Manufacturing Institute Heroes MAKE America program.

AFSN has created a mentorship program that pairs veterans with a different member of the community to assist with the translation of military skills and progress the mentee’s career. AFSN also partners with military organizations around the country to provide resources and community for veterans and their families. For example, on September 14th AFSN members attended the Navy Seal Foundation Chicago Midwest Evening of Tribute in support of the Naval Special Warfare personnel and their families. The event was focused on bringing awareness to the Navy Seals and military service member’s contribution to our national security.

“We’re working hard to be the one-stop-shop for veterans’ needs. Our goal is to attract and retain veterans by creating the best possible employee experience,” Ernie said.


Supporting Veterans and Their Families Through the Heroes MAKE America Program Earlier this year, the Caterpillar Foundation partnered with the Manufacturing Institute (MI), providing a $2.25 million grant to support the work of Heroes MAKE America. This MI initiative builds connections between the military community and the manufacturing industry.

Heroes MAKE America’s training program arms participants with the skills and certifications needed to find and excel in manufacturing careers. Through in-person and remote training, Heroes helps members of the military community transition to their next mission in manufacturing. The Foundation’s grant allows the Heroes program to enhance and deploy workforce initiatives that address a growing manufacturing skills gap. Heroes MAKE America, a Department of Defense–approved SkillBridge program, is open to transitioning service members, veterans, and military spouses.