When Ryan Hwangbo goes to a concert, it’s not what’s on the stage that really gets his attention. It’s the people behind the scenes that fascinate him – how each member of the production staff has a very specific job that comes together to create a flawless performance. This behind-the-scenes work resonates with Ryan because that’s how he sees his role at Caterpillar as a data analyst.

The data Ryan analyzes comes in from dealers and other sources from all around the world – Israel, South America, Canada, UK, Australia and also his native Korea. “I gather a bunch of different data into the system, find an optimal solution then pass it off to whoever has ownership of it. This is how I provide support.”

Within the company, Ryan has found a special connection within the Korean Employee Resource Group, which has about 140 members worldwide. The group works to increase Caterpillar’s brand recognition in Korea, and to recruit Korean college students.

While he identifies with his Korean heritage, he doesn’t limit diversity and inclusion to an ethnic definition. Instead, his view relies on not only keeping an open mind, but also an open heart to all people.

“If you don’t open your heart, people around you won’t open their hearts,” he said. “It all comes down to respect.”

Caterpillar’s powerful global production would not be possible without the contributions of each team member. That is the Power of Everyone. Are you ready to join the crew that builds what matters? 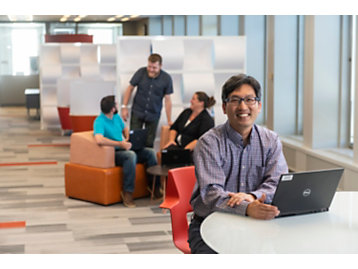