The Courage to Come Out

Heather L. has always had a home where people congregate. Her house is often full of the many friends and family who live nearby. And as she and her husband raised their two daughters, friends were a constant presence. Creating a space where people could be their true selves was important to her.

Heather's husband passed away in 2018. When she later came out as gay to her friends and family, the announcement didn't surprise anyone. She was still Heather, the avid reader and gamer, the woman with a soft spot for animals, the mom who raised her daughters to be fiercely independent.

At work, however, she had always kept her personal life personal. As a Section Manager in Texas, Heather runs the maintenance repair and operations cribs in Schertz and San Antonio. She has been with Caterpillar for 11 years. 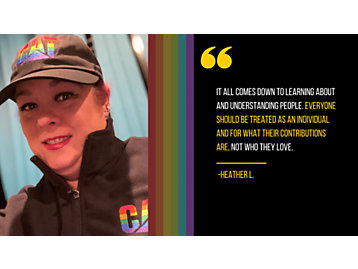 "As a leader, I felt I needed to keep a certain presence," she said. "I didn't want to be judged, and I didn't want people to look at my personal life and think it has anything to do with my capability on the job."

Heather joined Caterpillar Lambda, an Employee Resource Group helping to create an inclusive environment for Caterpillar's lesbian, gay, bisexual, transgender, intersex, queer employees, and their allies, working together to educate employees on the perspective and value of the LGBTQIA+ and ally community. She became engaged in the work to start a Texas chapter, and during a meeting to fill out the paperwork and charter, she very nervously came out to her ERG teammates for the first time. She found acceptance and support, and slowly progressed from there, next finding the courage to wear a shirt with the rainbow Caterpillar logo. Choosing a shirt when getting dressed in the morning is a small decision for most people, but this was a huge step for her, and one that has brought new connections.

"It is almost like a little sign you put on that says, 'I'm safe,'" she said. "While wearing the shirt, I've had people come talk to me about their children, or others they are close to who are part of the LGBTQIA+ community."

Now, she's open about her engagement to her fiancée, Ashley. And she's proud of the work that is being done at Caterpillar by Lambda, including Safe Space training and a focus on educating about LGBTQIA+ rights.

While being transparent about her personal life has been both refreshing and a little scary, she says she ultimately found the courage to come out from her desire to support others in the LGBTQIA+ community – both the ones who are out, and ones who aren’t. There are many actions people can take to show their allyship, she says, from acknowledging someone's partner as a partner and not just a roommate, to paying attention to how someone identifies and what pronouns to use, to not tolerating an inappropriate joke.

The small actions make a big difference, she said. When Heather recently visited one of her daughters, she was touched to see a Pride flag doormat had been placed on the front stoop.

"It all comes down to learning about and understanding people," she said. "Everyone should be treated as an individual and for what their contributions are, not who they are in love with."

Pride celebrations are not limited to the U.S. and not limited to the month of June. Caterpillar recognizes and stands with members of the LGBTQIA+ community around the world, and honors how this community contributes to the Power of Everyone. We believe our diversity makes us better and has allowed us to be an innovator for nearly 100 years. Learn more about our commitment to diversity and join the team today.