Erin Miller’s philosophy– every voice should be heard- is something she follows both in her career and in her personal life.

This wouldn’t come as a surprise to those who know her. Erin is the communications manager of the Global Rental and Used Equipment arm of Caterpillar, a team of roughly 100 employees around the world who are working to capture Caterpillar’s stake in the $100 billion machine rental industry.

Erin, a mom of two who also serves on the board of a local community theater, has made a career out of learning the stories of her colleagues and customers, then sharing them with others.

“I’m always motivated when I’m telling a story – whether it’s on a PowerPoint slide or social media post - as long as it’s something that resonates with people,” she said. And to get to the information that will evoke meaning in an audience, you have to do a lot of listening.

“Every single day is a collaboration,” she said. “When every voice is heard, chances are, someone is going to say something that will spark an idea in someone else.”

For example, her organization’s stories are often sparked in a meeting while combing through data from a spreadsheet – data that wouldn’t mean much on its own, without the insights and expertise of her colleagues in finance.

Erin says although her team is located all around the world, operating in different time zones and hailing from different backgrounds and cultures, they are focused on the same goal: delivering what the business needs. Success requires the voices of people with different skills and capabilities, in an environment that is inclusive.

In fact, she can’t think of a situation in which this isn’t the case; an array of perspectives always leads to better results. This is true of the community theater board meetings she attends, as well as meetings for the Experienced Professionals employee resource group at Caterpillar, which is a group focused on connecting members to strengthen Caterpillar’s network of professionals.  She has noticed it’s even true of her daughter’s sports team.

“I was watching my daughter’s first softball game, and all these kids had never played the game before. You could see how hard it was to go from one on one - practicing off the tee and playing catch in the yard - to actually needing each other to make anything productive happen in a game setting. My daughter could not grasp that she couldn’t score a run until three people ahead of her scored. It’s kind of like that in a workplace,” she said. “You truly need a team to make anything productive happen.” If you’re ready to join a team committed to helping our customers (and each other) build what matters, search and apply today. 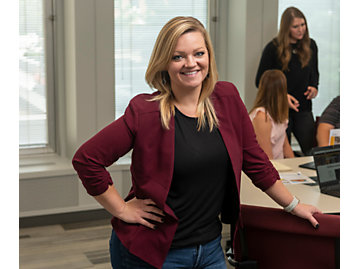