When you talk with Lou Davila, he will tell you how he sees it. His wife and two kids are quick to call him honest as a defining character trait.

But he hasn’t always been the kind of person to share what’s on his mind. In fact, he was a quiet kid growing up – a trend that continued through his studies at engineering school and into his early professional years.

Now, he leads a team within Caterpillar’s failure analysis group, and is also the global chair for the 1,200+ member Caterpillar Latino Connection (CLC) Employee Resource Group.

Lou attributes his transition from shy kid to confident leader to a couple of things that go hand-in-hand during his 19-year career with Caterpillar: feeling more comfortable in his own skin and feeling like he’s part of a team.

“When I got to working in teams in more, and we were able to address customers’ problems, I gradually became more of a leader,” he said.

This focus on teamwork coincided with his involvement in the CLC, which proved to be another important part of his personal and professional journey. The employee resource groups at Caterpillar help drive a culture of appreciating differences and inviting new perspectives and new ideas. This, in turn, can increase creativity and innovation, which improves our business and strengthens our teams.

“Through my schooling, I was generally the only Mexican or one of few. When I got to Caterpillar, it was similar,” he said. “Having always felt like an outsider and different, I wanted to put myself in a situation where I could be more comfortable. It was good to be a part of an Employee Resource Group. When I see someone who may feel how I did, I like to draw them into a discussion.  I like to get people’s perspectives because I really do want to make sure everyone feels included and comfortable.”

Seeking out and listening to other perspectives is a crucial part of inclusion. Ultimately, it comes down to creating a culture where everyone feels comfortable to be themselves, which helps them be their best.

“When you’re comfortable in a group, you’re not second-guessing or worrying that you’re doing something wrong and offending people,” he said. “Every person can make an impact.”

This advice is what he shares with his own kids, too. He tells them, “When you’re choosing a school or a place to work, choose a place where you can be your true self and also challenge yourself to grow, because that’s where you’ll thrive.” 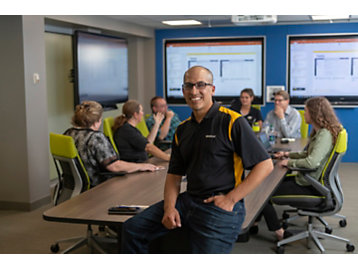