Kaitlin Gilbert’s technical knowledge really developed in the workforce after graduating with a generalist business degree. After her time as an officer in the army, she made a career move to Caterpillar Australia.

When transitioning to civilian life, her job search was short. Gilbert says she had an interest in autonomous mining as it was a very new field and it related to her background and skills, so when an opportunity at Caterpillar came up, she was instantly attracted to the role.

However, after a 17-year gap since her last interview experience, she said she had no idea what to expect or how to approach it.

“I wouldn’t say I lacked confidence, but I didn't believe in the value of my army training and didn’t think that the wider community would appreciate it either.”

Looking back, Gilbert said she had taken for granted the knowledge and skills she acquired during her career. She ended up getting the job and starting her new role as a product expert in the Caterpillar Minestar Command product, which enables autonomous haulage on mine sites.

Gilbert’s current role involves working closely with the mine, advising on product implementation and improvements of the product, and using her knowledge to improve productively and safety as the conduit between Caterpillar and the customer.

She credits her success to the transferable skills she learned from the army, including technical aptitude and understanding of technology. Yet she believes it was her soft skills, such as leadership, that really secured her role at Caterpillar.

Her transition from the army became easier when she found similarities between the two environments. She says the mining industry is very similar to defense because the camaraderie is strong and everyone works hard as a team to get the job done.

“Working for Caterpillar has been great; the technology team is a small close-knit group that really look out for each other.”

Overall, Gilbert has a very positive career outlook. With her passions in networking technology, she is excited to be a part of Caterpillar’s initiative to improve and develop autonomous mining.

“I am really excited about being a part of autonomous mining and the future opportunities this industry holds. I am at the forefront of mining - my role and the technology I am using is still so new and has so much room to grow.”

Working for Caterpillar as a veteran provides a strong foundation for an exciting, fulfilling career. A Caterpillar career is an opportunity to make an impact. Our customers are building the world’s infrastructure, mining the world’s resources and delivering power and energy solutions, and couldn’t do it without the equipment, engines and services provided by our innovative team. 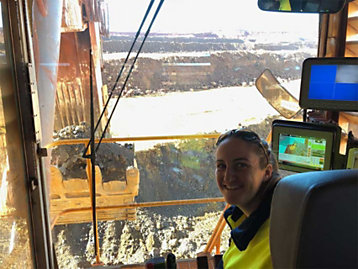