From Active Duty to Active Employee: Why Caterpillar Was a Top Choice for this Veteran

After completing his degree in mechanical engineering at Tuskegee University Jerry Johnson signed up to join the United States Navy working as a civil engineer. He went on to participate in two active rounds of duty abroad over the course of 15 years.

When it came time to return to civilian life, he sought guidance from his father-in-law who had always served as a role model. Once entering the doors of Caterpillar, Johnson found an environment where he could apply his military skills while growing in other areas.

WHAT MADE CATERPILLAR APPEALING AS A VETERAN?

Jerry says that his work with Caterpillar started in the military. They often worked with Caterpillar equipment, so he knew the product’s quality first hand. He also got an opportunity to see the international reach and enjoyed the potential to make a global impact.

Comradery is important in the military, and it’s also important at Caterpillar. Jerry says there’s a strong connection when working as part of a team that is focused on achieving the same goal while living out our values each day.

A strong work ethic, a “Midwest mentality” and a drive for results are just of the few similarities Jerry found within Caterpillar’s environment. He said Caterpillar employees work hard each day as a team with a diversity of thought to get the job done.

Are you a Veteran looking for your next career move? Search and apply for jobs today! 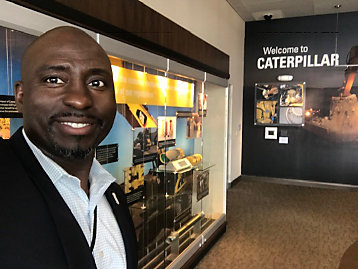