Gender Alliance - Everyone Plays a Part in Inclusion

“Diversity and gender equality drive global economic benefit,” says the program’s Vice Chair, Andy D. “Closing the gender gap supports women and a culture of inclusion.” As part of Caterpillar’s inclusion journey, a program was developed to spread awareness about the role men play in promoting an inclusive and gender-balanced workplace. The program provides accessible and easily digestible trainings and information about the power of diversity and inclusion in the workplace as well as resources to take action as a male ally.

It has been shown that as job seniority increases, there is a reduction in the representation of women, as well as opportunity to enhance the number of female applicants for open job opportunities. Andy and other members of team Caterpillar are leveraging research conducted about the current state of female representation within the company to support efforts to attract, retain and develop female talent.

“I often hear the misconception that men don’t have a role in achieving greater gender balance, but I believe this program has created a level awareness that shows that is simply not the case. Men play a critical role in driving a more gender balanced workplace,” says Andy. Learn more about Caterpillar’s commitment to diversity and inclusion. 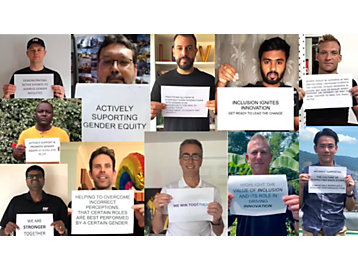