Former Military Veteran shares his story on why he chose Caterpillar after his time of service.

Jim Bartelme was born in Chicago IL and wanted to get close to home after his time serving in the military.  Caterpillar’s “strong midwestern values and work ethic” were just two of the qualities that first attracted Jim to the company during his first interview.   “Those things are at the core of what makes Caterpillar an iconic global brand,” said Bartelme.

“The hiring manager, Jerry Turner, was my first boss at Caterpillar, and he told me that Caterpillar rewards its people who work hard and are strong performers… and I’ve witnessed that many times throughout my career here,” said Bartelme.

Mr. Turner, was also a military veteran, who retired from Caterpillar just a few years ago with 45-years of service to Caterpillar.   Bartelme speaking of his first encounter with Mr. Turner, “I will always remember that during the interview Mr. Turner told me that he, along with many of his colleagues, have Yellow Blood.  When he explained what that meant,  and the tie to Caterpillar’s Values In Action, I felt right at home transitioning from the military as selfless service, commitment to the cause, and organizational pride strongly resonated with me.”

Today Bartelme jokes with his team that we are very blessed to work for the absolute best company, but says he truly believes it is—because, every day—we help our customers build a better world, and that is “because our people bleed Cat® Yellow.” 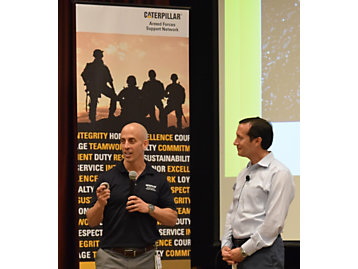