Fifty years is a long time. It’s a half century … 600 months … 18,250 days. And for an overwhelming number of people, 50 years is longer than they can imagine working for the same employer. Back in 1969, it felt the same way for Sherley Tyus – one of 12 children born to a Caton, Mississippi, sharecropper and his wife.

As an adolescent growing up on the farm, Sherley made $3 a day working sunrise to sunset in the unforgiving cottonfields of the Deep South. Yet, she managed to squeeze in an education around her family responsibilities. Soon after finishing high school, Sherley headed to Decatur, Illinois, to live with her sister and a few other young women seeking prosperous lives. Not long after she arrived, one of the church deacons took Sherley to Caterpillar to apply for a job.

Today, sitting at a breakroom table in the Decatur facility on a chilly winter day, she looks as though she couldn’t possibly be old enough to have worked 50 years anywhere. Her quick, genuine smile warms the room, and her eyes are as bright and clear as we imagine they were in her youth. Not a single hair is out of place. She’s respectfully known in this community as Miss Sherley – a reflection of the care and affection with which others view her. On the occasion of her 50th service anniversary, we’ve asked Sherley to talk to us, her Caterpillar family, about what her life has been like. How does it feel to have spent 50 years working for the same company?

Of course, she accommodates us because that’s who she is. Miss Sherley loves people and has never met a stranger. Her life is open for all to see.

“My first thought coming into the job interview back then was, ‘I probably won’t get the job anyway,’” Sherley says of her first interaction with the company. “At that time, you came to the plant and filled out an application. But afterward, I had a face-to-face interview with a man in HR, Dave Matthews, and I thought it went pretty well.”

Matthews said he’d call her in a week or two, but within three days, the phone rang. Sherley had landed the job.

“I was thrilled, but the surprising aspect was that the job was on third shift,” she continues, “I had never before stayed up all night. Not once in my entire life. I was a sharecropper’s daughter. You worked during the day and at night, you slept.”

But work at night she did. It was the beginning of a 14-year stint on Caterpillar’s third shift. And Sherley started building machines.

At first, she thought that she would work for short while, then return to Mississippi. Sherley’s dream – both then and now – was to attend college. “When I started working at Caterpillar, I thought that factory work was hard. And it was. But so was working on a cotton farm in unbearable heat from sunup to sundown,” she says. “The factory was physical labor, but I was used to that. So, I thought I’d tackle it head on and see what happens. And I went to work.”

Going from $3 a day to being paid by the hour seemed to Sherley like she’d found a pot of gold at the end of a rainbow. Still, Sherley was convinced she’d be moving on. “I thought I’d go to work, make a few dollars and get myself set up so I could go to college.” But then she says, “Life happened.”

Indeed, it did. Sherley met a man in the neighborhood and they began dating. Before too long they married and had a son. “Even after my son was born, I thought, ‘I’m still gonna go back to school.’ And I still have that on my bucket list today.”

When their son was small, Sherley and her husband worked different shifts, but pulled together to create a life they envisioned for themselves and their family. “We worked hard and expected our son to do the same,” she says, adding that the tyke began attending school at age two, graduated from college with honors and currently holds an assistant city manager position in a neighboring town of nearly 80,000 people. No doubt, an achiever who learned a thing or two from his parents.

“Those are the kind of people we are. We were cut from fabric of that nature,” Sherley says.

Sherley’s positive attitude and commitment to hard work never waivers. And, although her path was inevitably altered by a world that doesn’t stand still, this is one lady who’s keenly aware that she has had the freedom to make choices along the way.

“I’m a firm believer in the power of choice. My life is up to me – if it is to be, it’s up to me. But you have to work at it, and sometimes it’s hard. You have to adapt to changes. Maybe you don’t always want to, but you manage it and make the best of what’s in front of you. If you maintain that attitude, you can’t go wrong.”

During the past 50 years, Sherley has welcomed some changes with open arms, while others have been more challenging. This positivity in the face of change is one tip that Miss Sherley credits her long-term success to. For more of Miss Sherley’s pearls of wisdom to achieve a meaningful career, click here. When asked about welcomed changes, Sherley smiles broadly, and her eyes light up.

“When I hired in, there weren’t many blacks working at Caterpillar, not even in the shop. Everybody on my line was Caucasian. They looked at you differently and they treated you differently. But through it all, I didn’t let it bother me. I thought, ‘Hey, I’m doing this work for Caterpillar.’ And every day, I just came to work and did my best.”

Today, Sherley is thrilled to see the entire Caterpillar workforce from management to hourly include people from a wide variety of backgrounds, enabling a broad range of talent and experience to support the company and take it to new heights. It’s a change that makes Caterpillar stronger.

“We’ve got an awesome set of people representing minorities now. I’m just so proud of them. In that way, Caterpillar has been able to change over the years. And I see “us” doing the stuff we’re supposed to do. Give us the opportunity and we’ll do it,” Sherley says with a smile.

There is no question that Sherley is helping customers build a better world – her connection to customers and their work is always top of mind. She explains, “I am one person sitting here in the torque department in Decatur, Illinois. We build machines and send them out everywhere in the world.”

Once in a while Sherley sees one of her machines working on the side of the road while she’s on the way to work or the grocery story. Even then – especially then – she feels the connection. “Every nut, bolt, screw, hose clamp; everything that’s tightened on that machine came through me. So, my little mark is there,” Sherley says with pride. Those are Sherley’s machines.

“When I go up and down the highway and I see Caterpillar product working, I see my impact. I will continue being a part of it even after I leave this earth.”

Sherley’s son has stopped asking when she’s going to retire. It’s not that the grandmother of two is unwilling to answer the question, it’s just that she herself does not know the answer in terms of a day, a month or a year.

When asked what she would like her legacy to be, Sherley is silent for a moment. Then she answers softly, “I helped. I’d like people to say I did what was best for Caterpillar and myself. And I helped.”

Caterpillar is proud to have people like Miss Sherley on the team. Her unwavering commitment to building what matters is appreciated and celebrated today and every day. Thank you, Miss Sherley!

Learn more about Miss Sherley’s pearls of wisdom to build your own meaningful career. 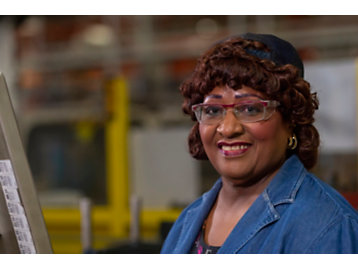