Dean Sampson wasn’t always sure what he wanted to be when he grew up. When it came time to choose a career path, he followed his interests and chose to study Design & Technology due to his love for making things using engineering programs.

Upon completion of his education he began to look for a job that matched the passions he had pursued in college and came across an apprenticeship at Caterpillar.

“I didn’t want to stop learning so the job looked perfect to me,” said Dean, “When I got offered the apprenticeship, I couldn’t wait to tell people that I was going to work for Caterpillar because of how well known they are, and how they treat their employees.”

Dean began working with Caterpillar in December 2013, where he spent six weeks in training and learned the basics. From there, he spent time on the production line during both day and night shifts. Upon completion of his year long apprenticeship he was offered an extension for a second year in 2014, which he quickly accepted.

As Dean neared completion of year two of his apprenticeship, he began to pursue a full-time position within Caterpillar.

“I applied for an operations technician role and had my interview on the very last day of my apprenticeship,” said Dean, “After putting a lot of work in to the interview I was told I got the job that same day.”

Less than three years into his new role, Dean began pursuing an opportunity to expand his learning in engineering. He spent his time attending night classes and studying electrical systems so he could advance further within the enterprise, ultimately leading to his current role as a Trainee Engineer.

Dean says his Caterpillar managers helped him work on his application and recommended him for his current role. “Without Caterpillar I would never have had the chance to have a job I enjoy and enhance my knowledge in the process.”

At Caterpillar, career progression and movement are not only possible, but encouraged. Unsure of what you want to do first? Search for opportunities today! 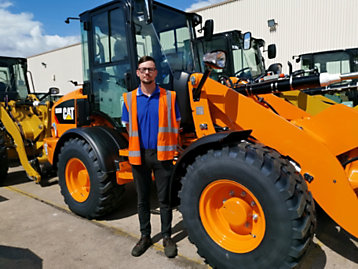