Jackie Ammons' theories on what it was like to be an engineer at Caterpillar were quickly debunked when she started her role as a Component Engineer in the North Carolina facility. She says her time spent communicating and collaborating with her peers and other engineers throughout the enterprise is the key component to delivering a quality product that is used in many of our machines.

For Jackie Ammons, there is a strong sense of pride in working with Caterpillar- and she comes by it honestly, “My dad and brother operate Cat equipment every day and always brag about how efficient their work is just from using their Cat machines. They are proud that I work for Caterpillar and think it’s so cool I get to see the behind-the-scenes work being done every day.”

As an engineer in the North Carolina facility, Jackie’s focus revolves around a hydraulic component found on many Cat machines.  This component is just a piece of the puzzle at Caterpillar, which makes it imperative for Jackie to understand the big picture of enterprise work and collaborate with the many different teams involved in creating Cat products. Jackie spends much of her time partnering with other engineers and product groups across the company to discuss designs and ongoing projects.

“I was guilty in thinking that engineers have limited interaction with others. Communication skills are a must as an engineer to share what you’re designing with different groups of people. This is a standard experience of being an engineer at Caterpillar.”

Communication at scales both large and small has been a driving force of Jackie’s success within Caterpillar. At the beginning of her career journey, Jackie was introduced to a colleague who would later serve as a mentor; guiding her through open projects, relationships with suppliers, and best practices. “Even though Caterpillar is a huge company, there is still a tight knit feel within my team.”

Caterpillar employees take pride in the work they do in all types of job roles.  Join our team today and unlock your world of possibilities. 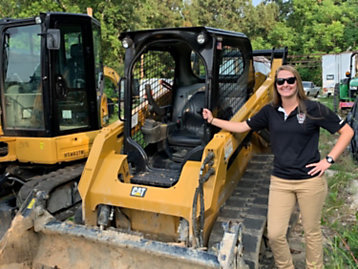