“It was the first time that someone in the U.S. believed in me and gave me an opportunity,” Kate Chen says of landing a highly coveted internship during graduate school. Though it was years ago, the lesson was not lost on her – she understands the power of having someone believe in you.

Born in China and raised by supportive parents, Kate has followed a somewhat non-traditional path. She earned a bachelor’s degree in materials engineering in her home country before moving to Chicago at age 26 to pursue a master’s degree in materials sciences from the Illinois Institute of Technology. It was there that she accepted an internship with a company. Kate’s leadership recognized her technical capabilities, believed in her, and provided a supportive environment where she flourished.

Kate later joined Caterpillar in 2004 as an engineer. Since that time, Kate has held various positions in both engineering and operations within Caterpillar in the U.S. and China and is currently a technical manager for Integrated Drivetrain.

In addition to her technical skills, Kate’s Asian background and American experiences have helped her appreciate the uniqueness each member brings to the team. It’s a perspective that has enabled Kate to build relationships and serve as a liaison with Caterpillar suppliers around the globe. 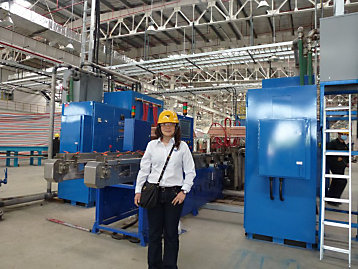 “When I adopt an inclusive mindset, it is much easier to understand the needs and interests of both parties and build a win-win strategy together,” Kate says.

Although Kate has now lived in the U.S. for half of her life, she maintains close ties to her Chinese roots. She embraces aspects of the American culture yet equally values her heritage and the camaraderie of her Chinese friends.

She feels fortunate to have parents, colleagues, managers, and friends who value her and appreciate her qualities and skills. Through their encouragement, she has learned to be true to herself and keep reaching for more. When Kate was offered an operations manager role at a Caterpillar joint venture, she was not sure if she could do the job successfully. She knew it’d be a big challenge, and she wasn’t sure if she was up for it.

A mentor encouraged her by saying, “We are engineers. We solve problems. Try it first; then you will know if you can do it.”  And she did.

May is Asian Pacific American Heritage Month, designated by the U.S. Congress in 1992 to celebrate the contributions of Asians and Pacific Islanders in the United States. The month of May was chosen to commemorate the first Japanese immigration to the United States on May 7, 1843 and mark the anniversary of the transcontinental railroad’s completion on May 10, 1869. Many workers who laid the rail tracks were Chinese immigrants.

While this observance started in the United States, Caterpillar recognizes our entire global team and how they contribute to the Power of Everyone. Caterpillar has a significant employee population in China, India, Japan and Singapore. We honor their contributions and those of our entire global team – our diversity makes us stronger and has enabled us to be an innovator for nearly 100 years.