Grow your career through new experiences

As we progress through our careers, how do we know if we are growing or if we are coasting? That question is one that might not have an apparent answer; however, Business Support Manager Amy Hoops Chadwick would recommend asking yourself the following question: when was the last time you did something unfamiliar, or even uncomfortable? Amy attributes the growth in her career to taking opportunities that directly challenge the areas where she knew she needed to grow. Sure, the growth process can be uncomfortable, but Amy would argue that the results are worth the strain.

For Amy, the greatest opportunity to grow was found in an international assignment. Working abroad was always part of Amy’s long-term career plan, and when the moment was right, she jumped at the chance to move to Desford, England to serve as a business resource manager. Amy says that the move itself was made simple by Caterpillar, who she says thought of practically everything she would need. She completed a course to learn the cultural difference that she might experience in the UK, including driving lessons. “Stepping off the plane, everything felt different to me. However, Caterpillar’s processes are generally consistent across the enterprise, which made the transition less difficult.” Over the course of her three to five-year assignment in the UK, Amy plans on traveling to experience as much as possible while she is abroad.

Amy recommends taking on tasks even when you don’t have much experience in doing them - perhaps, especially when you don’t have much experience. She says, “I have always told my children that you have to put yourself in unfamiliar territory to grow. If you don’t allow yourself to be uncomfortable, you won’t gain knowledge.” Some ways Amy has used temporary discomfort to grow were found in soliciting “tough feedback” from mentors, increasing her comfort in public speaking , and embracing the initial discomfort she felt when she began managing a team for the first time. Amy says each experience proved to be instrumental in her career and her ability to advocate for her continued success.

So, what’s next? Amy hopes to continue to improve upon her strategy skills as she knows it will be instrumental in the continued progress of her journey.

Join our team and begin building a career that will take you places. 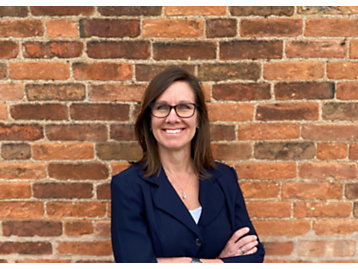